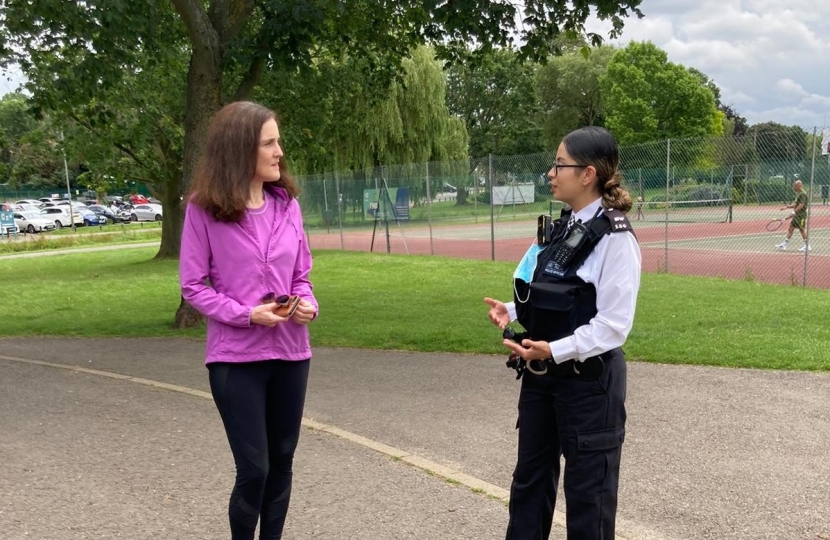 Barnet MP, Theresa Villiers, sought an urgent meeting with the police to discuss the stabbing which took place at the funfair in Oak Hill Park, in East Barnet, on Friday 9th July.

She was in the park the following morning and spoke to the local police Safer Nighbourhood Team who were patrolling there. She was later able to meet Police Inspector Tony Toporowskyj over Zoom to discuss what happened and to urge him to provide reassurance patrols around the neighbourhood.

Commenting on the situation, Theresa said “It is shocking that a stabbing took place in Oak Hill Park. Thankfully, it appears that the injuries sustained by the victim of the crime are not life threatening. I have appealed to the police to provide a visible presence in the area to reassure residents after this appalling incident.”

“Since 2019, police officer numbers in London have risen by 1369. Barnet has received a number of these and the size of the Met will continue to increase until the Government meets the national target of 23,500 additional officers. But clearly more work needs to be done to tackle burglary, car crime and violence in Barnet. I will continue to campaign for more police for Barnet.”

Following the stabbing, the funfair in the park was closed until Barnet Council carried out an enhanced risk assessment to decide whether it could be allowed to continue. This took place and extra conditions were imposed on security at the funfair. The rest of the park has stayed open as normal.