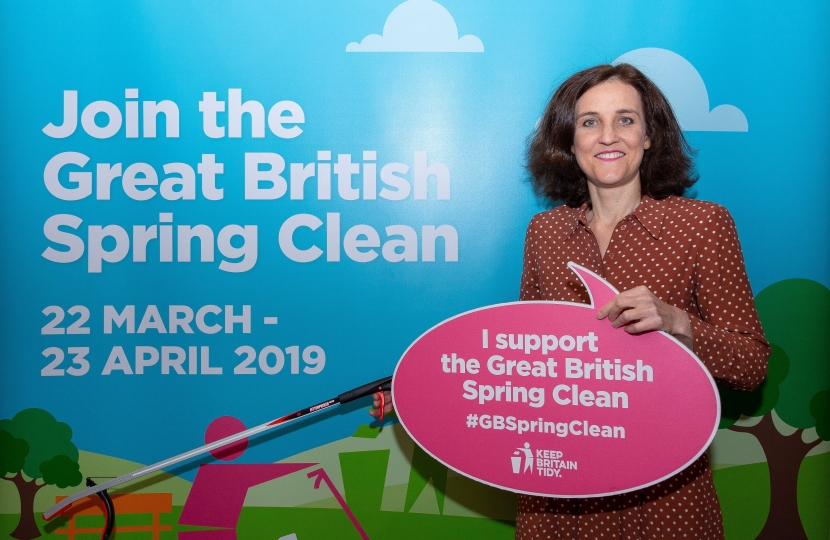 MP Theresa Villiers has pledged her support for this year’s Great British Spring Clean litter pick in her Chipping Barnet constituency. Theresa is hoping that local groups, schools and other organisations will join her in picking up litter as part of the initiative being organised by Keep Britain Tidy and the Daily Mail.

The former cabinet minister is a campaigner against litter bugs and even raised the matter in Parliament last year when she found a discarded Crunchie bar wrapper behind one of the green benches of the House of Commons.

The GBP campaign, which runs from March 22nd to April 23rd, hopes to see up to half a million people taking action to clean up streets, parks and beaches across the country.

“Littering is anti-social and damages our quality of life. It can happens in the most unexpected places – even Parliament! It’s important that all of us work together in Barnet and across the country to help make our public spaces cleaner and tidier,” said Theresa.

“I very much hope many people in Barnet will answer the spring clean call this year and give a hand to make our parks and roads litter free in this nation-wide show of community spirit; backing up the hard-working team workers responsible for local litter clearance in Barnet. That’s why I’m backing the Great British Spring Clean campaign by Keep Britain Tidy and the Daily Mail.”

“We all have a part to play in addressing this blight and for those who litter I can only ask them to stop and think about the cost and damage to our environment. It takes just a moment to put it in the bin.”

Last year, around 370,000 people, including 126,000 schoolchildren, across the country collected more than 630,000 bags of rubbish in what is Britain's biggest mass action environmental campaign.

Click here to get involved in the Great British Spring Clean visit: