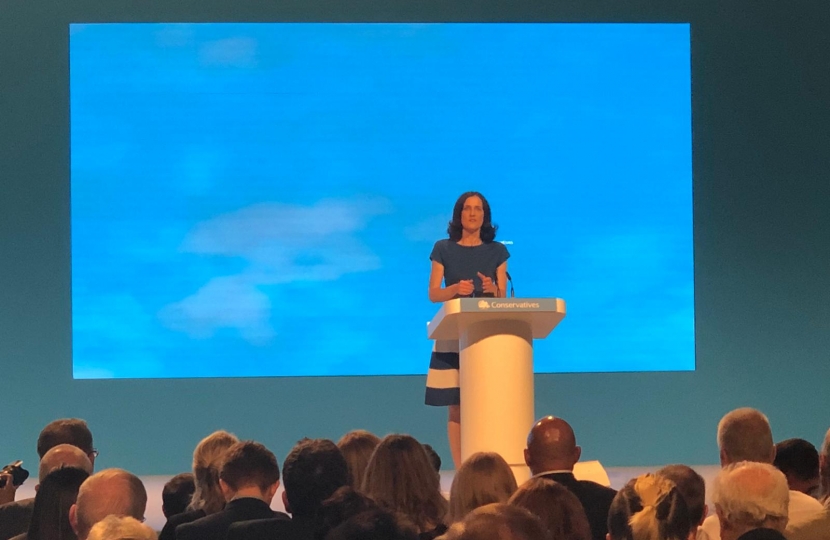 A long-time campaigner on matters related to the environment and animal welfare, Theresa Villiers has given a major speech at the Conservative Party conference in Manchester announcing plans to improve the welfare of animals in transport and restrict the import of objects from endangered animals shot by trophy hunters.

She also reaffirmed the Government’s commitment to address climate change, support nature recovery, and tackle plastics pollution on our oceans:

“It is great to be back on the conference platform once again.

My voice may be a little hoarse, but I’m ready to seize the once-in-lifetime opportunity brought by getting Brexit done, an opportunity that no Environment Secretary has had for decades.

For over 40 years, the vast majority of the work of Defra, and its predecessors, involved rubber-stamping and implementing decisions made in Brussels.

All that is going to change. We have the chance to take back control, control of our rules on farming, on animal welfare, on the environment, and on fisheries.

Yes, ladies and gentlemen, getting Brexit done means we’ll become an independent coastal state with control of our own fishing waters and I’m determined that will mean a better deal for our fishing communities.

They felt that their interests were sacrificed in the negotiations to join the EU, they’ve had a raw deal from the CFP ever since, and this Conservative Government must put that right. And we must release our farmers from the rigidity and bureaucracy of the Common Agricultural Policy.

Based on public money for public goods, our new support system will reward farmers for environmental stewardship and help them become more productive, more sustainable and more successful.

I’m proud to announce that we’re bringing forward proposals for consideration on banning the import of objects from endangered species killed by trophy hunters; on banning the sale of primates as pets; and on ending the live export of animals for slaughter.

A Conservative Government tried to stop live exports back in the 80s, but the ECJ wouldn’t let us.

I’ve campaigned against this trade for 20 years, it’s the source of grave public concern, and getting Brexit done means we’ll finally have the opportunity to bring it to an end.

On the environment, we’re at a cross roads.

We’ll have no chance of averting catastrophic climate change if we don’t reverse the worrying decline of wildlife habitats and nature.

Conservation and biodiversity, and addressing the climate crisis… are two sides of the same coin.

Both are crucial for humanity’s future stability, prosperity and quality of life.

We need to act now to reverse the tragic loss of biodiversity at home and around the world.

This was the powerful message our Prime Minister gave at the G7.

And at the UN last week he made a historic commitment to double our funding to £11.6 billion, to help developing countries protect nature and climate.

This will safeguard vast areas of wildlife habitats and conserve them for future generations.

Our domestic commitment to nature recovery will be driven by our hugely ambitious 25 Year Environment Plan.

And the landmark Environment Bill I’ll present to Parliament will push that work forward, including creation of a powerful new independent environmental watchdog.

We’re pushing the water companies to do more to combat pollution, so our rivers and waterways are cleaner.

We’ve set ourselves demanding targets for cleaning up air quality, so children growing up today can live longer and healthier lives.

And this week we’ve pledged up to a billion more to reduce harmful emissions from transport.

And we’re delivering major programmes of tree planting as a vital component of becoming a net zero economy.

I’m delighted to announce that we’ll press ahead with creating extensive new forests in Northumberland, following on from our pioneering work on the Northern Forest.

In the years to come, the lasting legacy of this Government will include millions of trees to enhance our landscapes, improve our quality of life, and protect our climate for future generations.

And we are resolute in our determination to tackle plastics pollution.

Who could fail to be moved by what we’ve seen on our TV screens of birds and marine life choked by plastic?

We will not stand by and let the tragedy of plastics pollution of our oceans continue.

We’ve introduced world-leading measures on microbeads, and our plastic bag charge has seen bag use plummet by 90% since it was introduced.

Working with overseas territories, we’re on track to protect over 4 million square kilometres of the world’s oceans by the end of next year.

And we’re building an international coalition to enable us to go even further and faster.

No other nation on the planet is doing more to address what is a defining issue of our time.

Historians will judge us on whether we succeed or fail, and we will not be found wanting.

The Conservative Party has a long and distinguished tradition of leading on the conservation of our natural environment.

It was a Conservative Government which introduced the 1957 Clean Air Act.

It was Mrs Thatcher who was the first leader on the global stage to warn seriously of the dangers of climate change.

And it was this Conservative Government which made the historic commitment to becoming a net zero carbon economy.

As the grandfather of Conservative thinking, Edmund Burke, put it: we are "temporary possessors or life renters" of this world, and we have a moral obligation not to squander our natural inheritance, lest we "leave to those who come after … a ruin instead of a habitation".

Children and young people across the nation are demanding change and we are determined to live up to the challenge they are setting us.

We want this to be the first generation to leave the natural environment in a better state than we found it.

This wonderful country led the world in the industrial revolution.

Now, at this cross roads for the future of our planet, we can lead once again in a new green economic revolution, and we can put our country on track to a brighter, greener, better future.”