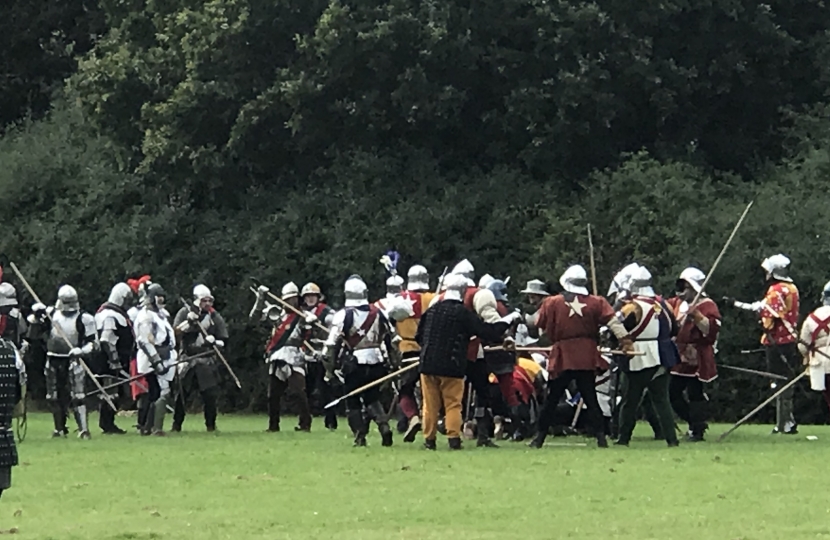 The Barnet Medieval Festival made a highly successful return after a two year gap caused by the Covid outbreak. Theresa Villiers MP is a big fan of the festival and was in attendance for the formal opening, which included the firing of a replica cannon by the Representative Deputy Lieutenant for Barnet, Martin Russell.

Over the course of the day event during the weekend of 11th and 12th September, over a hundred people carried out re-enactments of the Battle of Barnet and Tewkesbury. These battles both took place in 1471, exactly 550 years ago.

They were decisive victories for King Edward IV and the House of York and were an important turning point in the transition from the medieval to the modern era.

Speaking at the festival, Theresa Villiers said “This year's Barnet Medieval Festival has been bigger and better than ever before!"

"It is a brilliant event for our local community. It was great to see many hundreds of people gather in the sunshine to watch the Battle of Barnet being re-enacted in this 550 anniversary year."

"I hugely enjoyed my time at the festival. It was one of the first re-enactment events to take place after the lifting of Covid restrictions and I pay tribute to all the volunteers to who took part. That includes the people who came from far and wide in medieval costumes to host stalls to take part in the battle re-enactments; and also people like Susan Skedd, Ave Vinick, Bob Burstow and Winnie Mbiu whose hard work in organising the event made the whole thing possible. Many thanks to all of them.”

As well as the re-enactments, the festival included a range of activities for all ages, enabling people to learn more about how life was lived in the Middle Ages. Local groups such as the Barnet Society, Christchurch and Barnet Museum also had stalls and played an enthusiastic part in making the weekend such a success.

Barnet Hospital hosted a visit from local MP, Theresa Villiers, this week. Yesterday, the MP for Chipping Barnet met Debbie Sanders, CEO of the hospital, and senior members of her team.