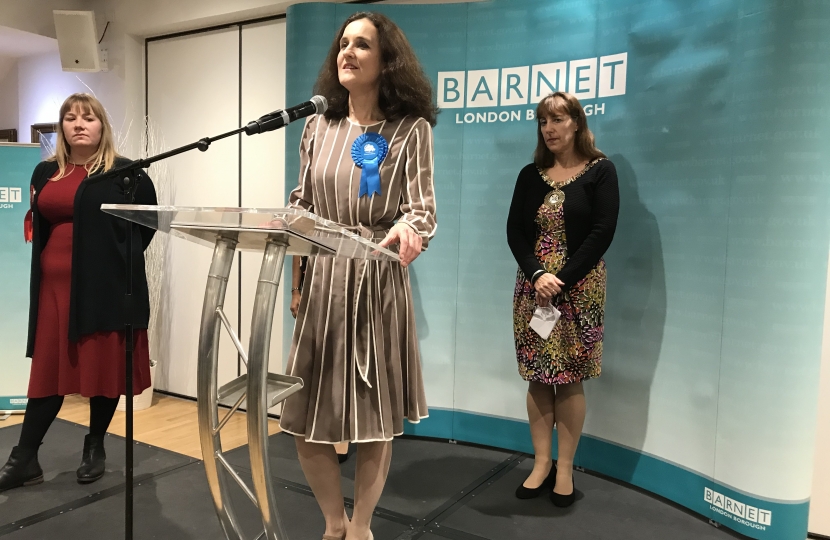 In the early hours of Friday 13th December Theresa Villiers was re-elected as the Member of Parliament for the Chipping Barnet constituency at a count taking place at the Allianz Park. Theresa has represented the constituency in Parliament since 2005. Following the first December General Election for almost 100 years Theresa re-elected by her constituents with a majority of 1,212 over her Labour rival.

During her victory speech Theresa said “I want to thank every single person who turned out to vote for me in this general election.

I feel deeply humbled to have been chosen for a fifth time by the people of Barnet to represent them in Parliament. It’s been a huge honour and privilege for me to have been able to serve the people of this constituency for 14 years as their MP. I am massively grateful to have been given the opportunity to do this for a further term.

I love this place, this community which is my home, and I will always campaign hard on the local issues that matter to all of us who live here.

It’s clear that Brexit has created new fractures in British politics, including right here in Barnet. In whatever way I can, I’ll work to try to bridge these divisions, to bring people back together.

I’m deeply thankful that my time as MP for Barnet has enabled me to champion so many issues that I care deeply about, not least the protection of our green spaces, our natural environment, and our climate. These are some of the defining challenges of our time. I focused on the environment in my first speech in the House of Commons, and these are some of the causes which I will continue to champion as the newly re-elected Member of Parliament for Chipping Barnet.