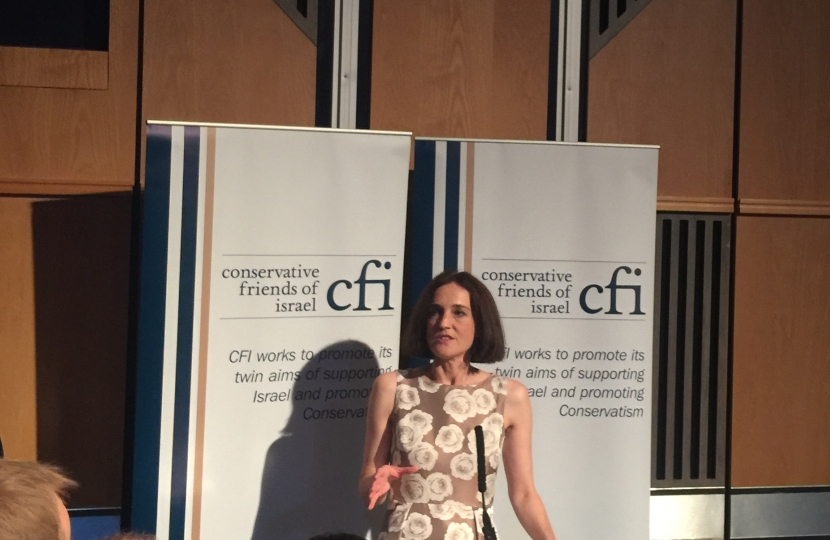 In the last of ten speeches over the four days of the Conservative Party conference in Birmingham, Theresa Villiers, MP for Chipping Barnet, addressed a meeting of several hundred people hosted by Conservative Friends of Israel (CFI):

"It is both an honour and a privilege to be able to say a few words to you this evening.

I have been a member of CFI for 17 years and it is always good to come to this reception to express my strong support as a friend of Israel.

I have visited Israel twice, once as a tourist and once as part of a CFI delegation.

During both visits I was hugely impressed by the energy, dynamism and entrepreneurialism of Israel’s population.

CFI do incredibly important work in enabling Parliamentarians to see what a wonderful country Israel is and what adversity it faces.

One of the reasons it is so important for CFI to take MPs to see Israel for themselves and meet its people is that we all know that Israel almost never gets a fair hearing from the media in this country.

Well let me admit to being a serial complainer about media bias towards Israel and I will continue to complain about unfair or one-sided coverage whenever I see it on our TV screens.

And I will do all I can to stop UK aid money from falling into the hands of terrorists, extremists or anti-Semites an issue I have campaigned on for many years.

And I will continue to work to combat and condemn against anti-Semitism wherever it is found.

Just a few years ago, many people might have assumed anti-Semitism was fading into history.

No one who follows politics in this country could now be guilty of such naïve optimism.

I find the situation in the official opposition to be deeply disturbing.

I’ve been a Conservative all my life, but I can accept that the Labour Party has had a very significant role in our politics for 100 years. In that time, it has delivered some major achievements a number of which have undoubtedly changed this country for the better.

But there now can be no doubt whatsoever that Labour has a serious problem with anti-Semitism.

It is quite shocking that Labour women MPs have been subjected to vile abuse.

It is astounding that the Chakrabarti Inquiry felt the need to remind Labour members that “Racial stereotypes [and] epithets have no place in the Labour Party”. I would have thought a modern political party with an ounce of decency would not need an inquiry to appreciate that racial abuse has no place in a civilised society.

So we in the Conservative Party have a crucial task ahead of us in the next four years.

At all costs, we must make a success of Government. We just can’t afford mistakes. We have to go into the general election in four years’ time in a strong position because we absolutely have to save this country from Labour.

They are not fit to govern. It is our solemn duty to prevent them from taking power. And I look forward to working with CFI to ensure we have a Conservative Government re-elected in four years time."