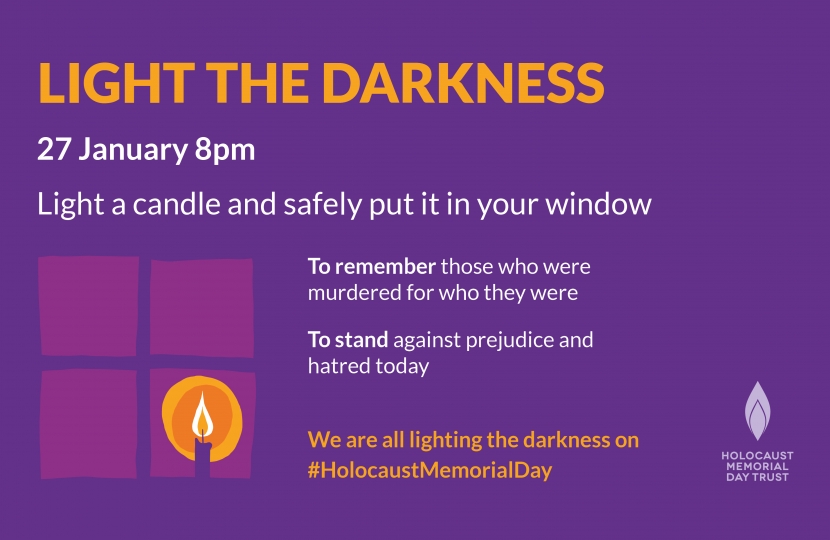 I have been attending the Barnet Council commemoration of Holocaust Memorial Day for many years to honour the millions who were murdered by the Nazis. Although gathering together in the normal way cannot happen this year, I will be watching the film produced by the council to mark this important annual event. It will be released on www.barnet.gov.uk/holocaust at 10am on Holocaust Memorial Day (Wednesday 17th January). I look forward to hearing from the guest speakers, Chief Rabbi Ephraim Mirvis, Robert Rinder and Mala Tribich.

Mala is my constituent and she is a Holocaust survivor. It is always incredibly moving to hear her tell her story. First hand testimony is so important in ensuring that young people understand the full horror of what happened to ordinary people like Mala.

No other episode in human history can match the Holocaust in the scale and depth of evil it involved. That so many people stood by when their Jewish friends and neighbours were subjected to unspeakable cruelty is one of the most truly shocking parts of that story.

As well as the six million Jewish victims of the Holocaust, there was millions of others who met their deaths at the hands of the Nazis and their allies: three million Soviet prisoners of war; a further three million civilians from Poland, Belarus and other parts of Eastern Europe; over 200,000 Sinti and Roma; others were brutally murdered because they were gay or they had a disability.

But we should also remember those who did not look the other way when Jewish people and others were being attacked and rounded up. There were many who stepped up and helped save lives even when that involved great risk to themselves and their families.

So as well as stories of appalling cruelty, the events we on which we reflect on Holocaust Memorial Day also gave rise to heroism from people like or Frank Foley, and so many others who gave sanctuary to Jewish people fleeing the Nazi atrocity.

Frank Foley worked for the Foreign Office and was Head of the British Passport Control Office in Germany for a period in the 1930s and 40s. During his time in Berlin, Foley saved an estimated 10,000 German Jews. He visited internment camps to get Jewish people out, he even hid them in his home, and he helped forge passports for them.

During his lifetime, Foley received no recognition in the UK for his actions. However, in 1999, he was recognised as ‘Righteous Amongst the Nations’ at Yad Vashem in Israel. On 24 November 2004, the 120th anniversary of Foley’s birth, a plaque was unveiled in his honour at the British Embassy in Berlin. Among those who travelled to Berlin to take part in a special ceremony was Elisheva Lernau, 91 at the time, who had been rescued by Foley.

You can find out more information about Frank Foley and others who helped save people from the Nazis by visiting the website of the Holocaust Memorial Day Trust here.

I want to thank the Holocaust Memorial Day Trust, the Holocaust Educational Trust, and the Anne Frank Trust for the outstanding work they do in ensuring that we never forget. I will be logging into the national commemorative ceremony for HMD which is taking place online.

Lastly, we must remember that anti-Jewish racism is still with us. It has mutated and taken on new forms. It has been given a new lease of life by the militant anti-Zionism of the radical left and it has been given a new platform by modern communication. So Holocaust Memorial Day is a crucial opportunity for all of us to condemn antisemitism in all its forms and to make the firmest of commitment to root it out wherever it shows itself. I have campaigned against antisemitism and other forms of racism for many years and this will always be a priority for me.”