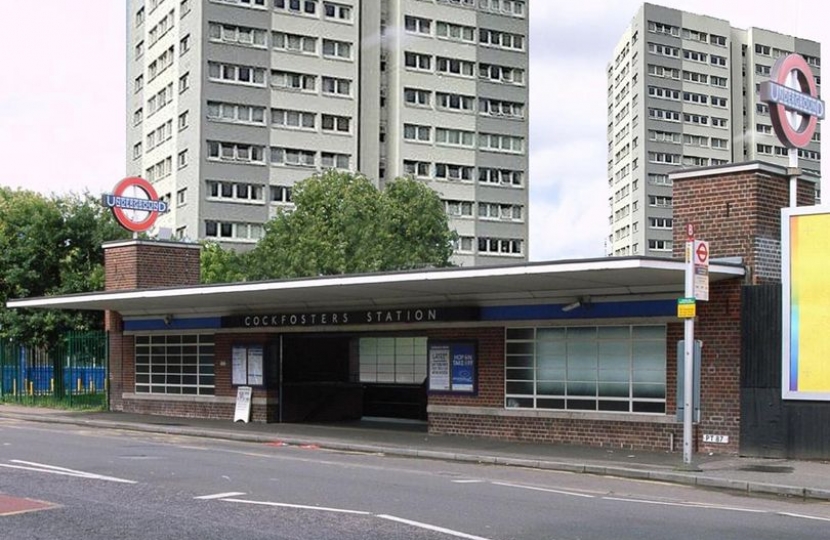 Chipping Barnet MP, Theresa Villiers, has strongly condemned a planning application submitted by the Mayor of London to build tower blocks over the car park at Cockfosters tube station.

“These proposals are truly appalling”, the MP said, “Blocks of up to 14 storeys would be completely wrong for this suburban setting, right next to the important heritage sites of Trent Park and Cockfosters station.”

“The buildings would amount to a massive urbanisation of the area, changing its character forever. Cramming 351 flats into the site, with no parking provided for new residents, would leave neighbouring streets packed with overspill parking.”

“The Mayor’s plans to build over the station car park would also mean the loss of a vitally important park-and-ride facility at the end of the Piccadilly Line. This will deter people from using public transport. Residents with impaired mobility will be especially hard hit because cycling and walking alternatives are just not viable for them. Women worried about their security would also lose out if they can no longer leave their cars at the station, particularly if they do shift work.”

“Whilst the development is just over the borough boundary in Enfield, I know that many of my constituents are up-in-arms about what the Mayor and TfL want to do. I will be fighting against these proposals as hard as I can.”

These controversial plans for Cockfosters are being taken forward by Connected Living London which is a joint venture between TfL and the developer Grainger Plc. You can find further details here on the Enfield Council website, using the reference 21/02517/FUL, or from the Save Cockfosters campaign group website here.

The image in this article has been produced by the Save Cockfosters campaign to give people an idea of what he Mayor's proposals would look like.