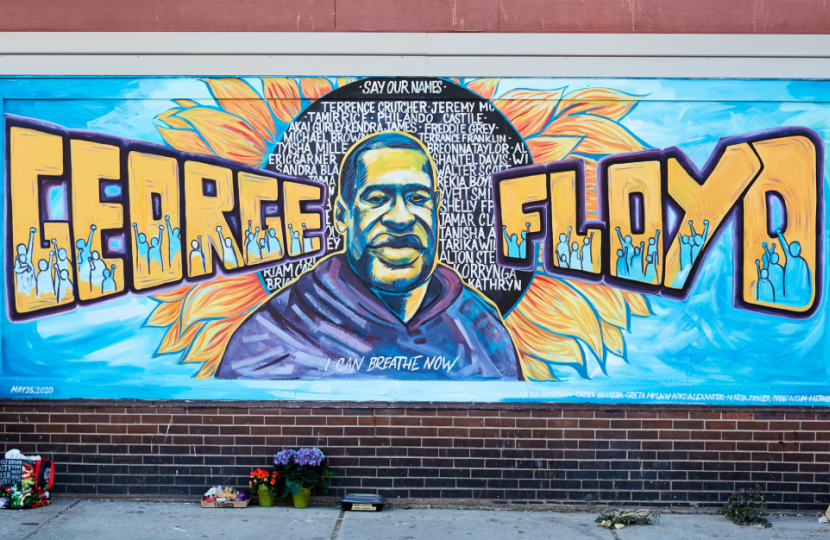 I would like to thank all of the hundreds of people who have contacted me about the shocking death of George Floyd, the Black Lives Matter campaign, the vital importance of combating racism.

What happened to George Floyd was an appalling injustice. The video footage is deeply harrowing. I found it very disturbing to watch and I can completely understand the anger and distress which this case has caused in the US and around the world. I welcome the fact that criminal proceedings have begun and I hope that those responsible for Mr Floyd’s death are held accountable. This is a time for all of us to state loud and clear that black lives matter.

I appreciate why people feel the need to protest. However, such protests should always be peaceful and lawful. I would therefore appeal to people not to gather in large numbers. They could be jeopardising their own health and others by gathering in groups of more than six. I very much hope the continuing fall in the number of Covid infections will mean that life can return much closer to normality soon, but until lockdown restrictions on mass gatherings are lifted, it is best for big protests to wait. They will still send a powerful message, even if they are postponed for a month or two.

The violence that has marred protests in the US is very worrying. I hope that we will see a de-escalation in tension. I recognise the concern felt by many people regarding the approach taken by President Trump. Whilst the policing of protects in US cities is for the authorities of that country, I certainly don’t agree with President Trump’s suggestion that the Federal Government orders US army on to the streets.

In response to concerns about export of items such as tear gas used to police protests in America, I can provide the reassurance that the UK operates one of the toughest export control regimes in the world in relation to arms and policing equipment. Each case carefully considered and export licences are not issued if there is a credible risk that the goods in question might be used for unlawful repression of protests.

The George Floyd tragedy should cause us to reflect on what more we can do to tackle racism and inequality in the UK. I believe that there is much to be positive about in respect of community cohesion and harmony of our country. For example the borough of Barnet is home to one of the most culturally and ethnically diverse populations in the country and we have a strong record of unity and friendship between people from different backgrounds, faiths, and heritages.

But I acknowledge that there is much work still to be done to address inequality and lift the barriers faced by many in the black, Asian and minority ethnic community. The appalling failures by successive governments which led to the Windrush scandal are a shocking illustration of the unequal treatment to which some have been subjected. It is deeply disturbing to hear the stories of those whose citizenship and right to be in this country was challenged in circumstances which were wholly unjustified.

Social mobility and giving everyone an equal chance to get on in life and realise their potential is central to what the Conservatives want to achieve for this country and I wholeheartedly share that goal.

So I have campaigned against racism and antisemitism for many years, raising these issues in Parliament. Racist abuse or discrimination is completely unacceptable and I have always spoken out strongly against it. For example, when the Islamic Cultural Centre in Muswell Hill was burned down in an arson attack in 2013 I immediately denounced it for the hate crime that it was. I then worked for several years with Barnet Council and the Somali Bravanese Welfare Association to secure a replacement cultural and community centre which opened in 2019.

Tackling educational under-achievement is crucial if we are to remedy inequalities and allow everyone to go as far as their talent will take them, regardless of their social or ethnic background. Securing the best schools for my constituents in Barnet has therefore always been a top goal for me.

We thankfully do not face the same issues with policing and race as they do in America. There have of course been past failures by the police here, notoriously in relation to the botched investigation of the murder of Stephen Lawrence. It is by no means the case that all problems in British policing have been resolved. But there has been a profound change for the better since the Macpherson Report on the Stephen Lawrence case concluded that there was institutional racism in the police.

That said, it is still the case that young black men are disproportionately represented in the prison population and the criminal justice system. We do need to establish why this is and address the causes.

And of course it is vital that we find out why Covid-19 has had a heavier impact on people from BAME communities. I raised this issue in Parliament last week. It is heart-breaking to see the photos of the NHS workers who have lost their lives to coronavirus, so many of them from BAME communities.

I am also deeply saddened by the number of bus and taxi drivers and other transport workers from BAME communities who have died. The tragic case of Belly Mujinga has understandably caused huge concern. I understand that the police enquiry concluded that what occurred on 21st March at Victoria Station could not have caused Miss Mujinga's death. But I agree with the constituents who have contacted me that we must have a further investigation into what happened to establish the full facts. I will be raising this with the British Transport Police. In Parliament, I urged the Health Secretary to take action with transport operators to keep transport workers safe, including those from BAME backgrounds.

Lastly, I want to add my voice to calls made for black history to be a much more prominent part of the school history curriculum. I agree that the history of black and minority ethnic people in Britain is not sufficiently reflected in school history classes. For me this is a fascinating area of study which has interested me over a long period.

Black people have been living in Britain since at least Roman times. A particularly striking example is the so-called “Ivory Bangle Lady” whose remains were found in York in 1901 and who is thought to have been a high status woman of African origin living in Britain in the second half of the 4th century. Studying more of the history of BAME communities in our country is a worthwhile activity for every school pupil to undertake. It is also important that children learn about the horrors of the slave trade as one of the greatest crimes against humanity ever committed.

In conclusion, the murder of George Floyd could be a turning point for the US, and signal a better future for African-American people. But we all have lessons to learn from what happened and we should try to use concern about the case as a catalyst for positive change so we can make our country a better fairer place where everyone has a chance to make a success of their future, wherever they started out in life and whatever their ethnicity.