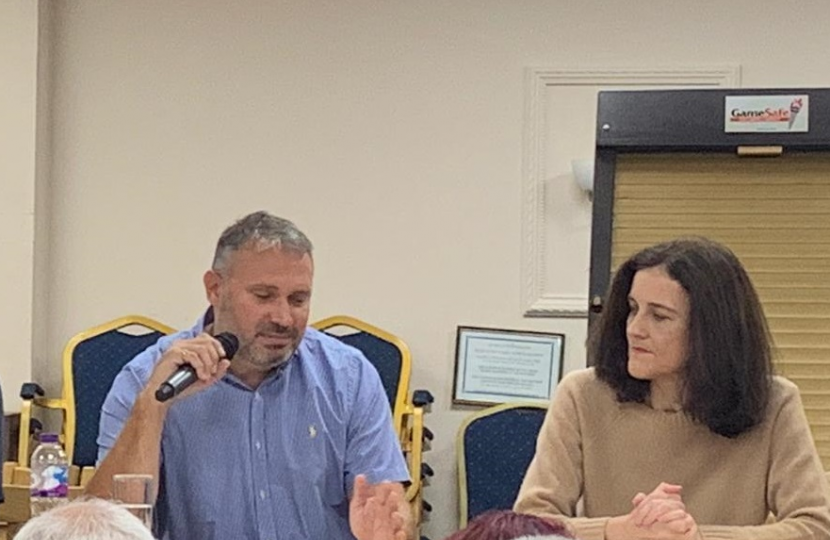 MP Theresa Villiers spoke to concerned East Barnet residents at a public meeting on Sunday on reducing crime in their neighbourhood.

The meeting was set up as a result of discussions between Theresa and local residents living in Welbeck Road, following the fatal stabbing which took place there in June.

Theresa told the meeting she had contacted the police and the Mayor’s office within an hour of hearing about the killing, asking for extra police patrols to provide reassurance.

She wrote to residents in Welbeck Road updating them on the situation and later met householders to hear their concerns about alleyways, drug dealing, street lighting and the need for CCTV. She subsequently raised the case in Parliament and called for tougher sentencing for knife crime.

“This was a very helpful meeting and I thank residents, Richard Murray and Robert Brown, for organising it. Local people were able to ask questions and talk about their concerns on a variety of important crime issues,” said Theresa.

“The good news is Barnet Council is working on CCTV for the area and it is considering installing temporary cameras pending installation of long-term ones.

“The Council has set up a working group to see if more can be done to prevent crime in East Barnet. Residents tell me there is a problem with alleyways too and I hope we might be able to get some of them gated.

“I made it clear we need more police officers for Barnet and we need to save Barnet police station. The Met has been given an extra £172m this year and some of the new officers that will fund need to be deployed in our borough. I will continue to push the London Mayor for a fairer share of police resources here in Barnet.”

In the wake of the stabbing in Welbeck Road, Theresa raised the concerns of residents with the Home Secretary, Priti Patel, who wrote back to declare her determination to ensure that the police have the resources, power and authority they need to protect the public. Ms Patel also outlined plans for a new Police Covenant to recognise the bravery and sacrifice of officers and confirmed that work was underway to recruit 20,000 additional officers.