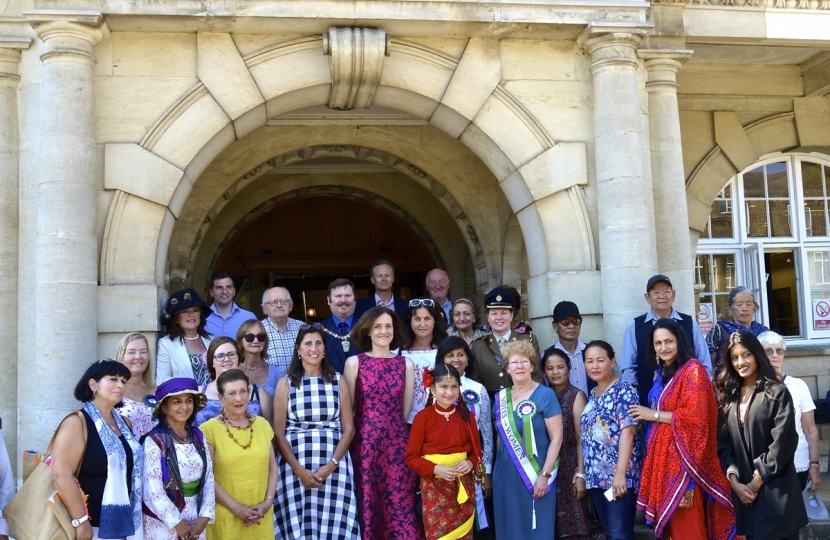 The borough of Barnet celebrated the birthday of Emmeline Pankhurst this year in order to mark a 100 years since the extension of the franchise to women in 1918. The event was presided over by the Mayor of Barnet and organised by Anjantha Tennakoon of the Conservative Women's Organisation. It took place on the steps of Hendon Town Hall. There were inspirational speeches from a number of women, including Lieutenant Colonel Angela Richardson, and a dance performance by Nishida Prarthana.

In her speech to the gathering, Theresa said "It is an honour to be here today to celebrate the brave women who campaigned for the enfranchisement of women. One of them was a relative of mine, Constance Lytton. She came from a privileged background but she was determined to make a difference. She became committed to women’s suffrage and joined the WSPU in 1908, the group led by Mrs Pankhurst.

Like others in the WSPU, she took part in what would today be called direct action - breaking the law as a means to try to push forward the suffragette cause. As a result, she was sent to prison but initially let out because of her family background.

She was outraged by this and wrote a letter of complaint. To ensure that she was treated the same as others, she used a false name the next time she was arrested. Whilst in Holloway, she used some enamel from a broken hairpin to carve the letter V into her chest over her heart. She was imprisoned four times and force fed after going on hunger strike.

The accounts she wrote about this are deeply disturbing: "[The doctor] said if I resisted so much with my teeth, he would have to feed me through the nose. The pain of it was intense and at last I must have given way for he got the gag between my teeth, when he proceeded to turn it much more than necessary until my jaws were fastened wide apart, far more than they could go naturally.

Then he put down my throat a tube which seemed to me much too wide and was something like four feet in length. The irritation of the tube was excessive.

I choked the moment it touched my throat until it had got down. Then the food was poured in quickly; it made me sick a few seconds after it was down and the action of the sickness made my body and legs double up but the wardresses instantly pressed back my head and the doctor leant on my knees.

The horror of it was more than I can describe. I was sick over the doctor and wardresses, and it seemed a long time before they took the tube out.

As the doctor left he gave me a slap on the cheek, not violently, but, as it were, to express his contemptuous disapproval, and he seemed to take for granted that my distress was assumed...

She died of a heart attack and stroke at 54 after her health was permanently damaged by force feeding. We all owe so much to that generation of women.

There are 208 women MPs in Parliament out of 650. That is 32%. There are 67 Conservative women MPs, 21% of our 317 total. Since 1918 489 women have been elected as MPs. There are 442 men in Parliament right now! So the total in a hundred years has only recently crept up above the number of men presently serving as MPs. So we’ve made real progress since our foremothers fought for the right to vote in the early years of the 20th century. But we all know the journey isn’t finished before we have genuine equality."