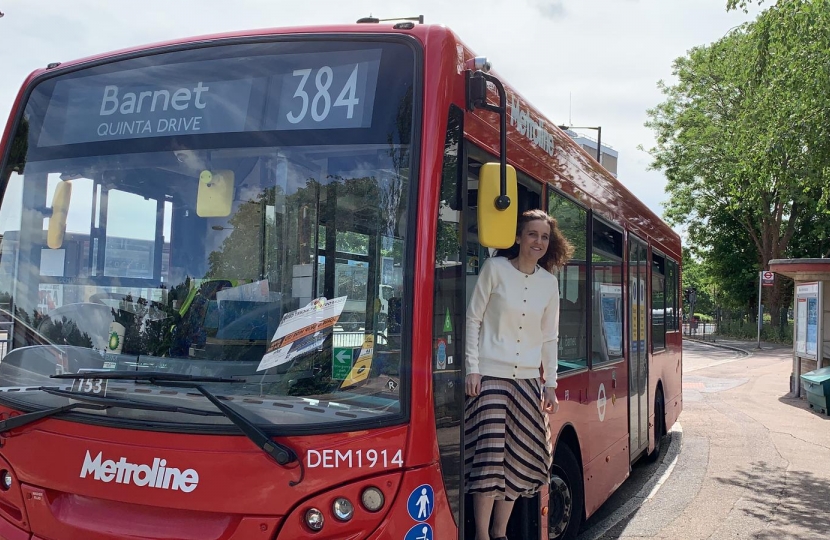 Elected representatives from across the political divide last month urged the Mayor of London and TfL to drop plans for the radical changes that have caused long-running opposition and will affect vulnerable passengers.

But in a letter to Theresa and other campaigners, Deputy Mayor for Transport Heidi Alexander said TfL will not reconsider and the new route starts in September.

“I am deeply disappointed, but not surprised, the Mayor and TfL have not listened to a groundswell of opposition to the unnecessary re-routing of this popular service,” said Theresa.

“The plan to re-route the bus away from many residential streets in New Barnet and the Bevan Estate will have a massive impact on elderly and vulnerable residents who will now have to walk so much further to catch a bus.”

Theresa was joined in the 384 campaign by Andrew Dismore, the Labour Assembly Member for Barnet and Camden, Conservative leader of Barnet council, Dan Thomas, and the leader of the Labour group, Barry Rawlings, who all signed the letter to the Mayor, Deputy Mayor and TfL.

“Political parties in Barnet don’t often unite around an issue, but everyone who signed the letter agrees that this decision on the 384 is the wrong one and will harm the ability of local people to use our buses,” Theresa explained.

In the letter the Deputy Mayor added: “I do understand that there is significant community interest in this issue and that further engagement would be beneficial.”

However, Theresa added: “So far it seems that the Mayor is just not prepared to listen to local people or Barnet’s elected representatives, and that this decision has been made at a time of national emergency when minds are elsewhere. More engagement will be pointless unless the Mayor and TfL are going to start to hear the views of bus users in Barnet and drop their plans to change the route."

“The approach taken on the 384 sends a message to the people of Barnet that the Mayor and TfL do not listen and they do not care about the needs of the vulnerable and elderly who need to use our public transport system.”