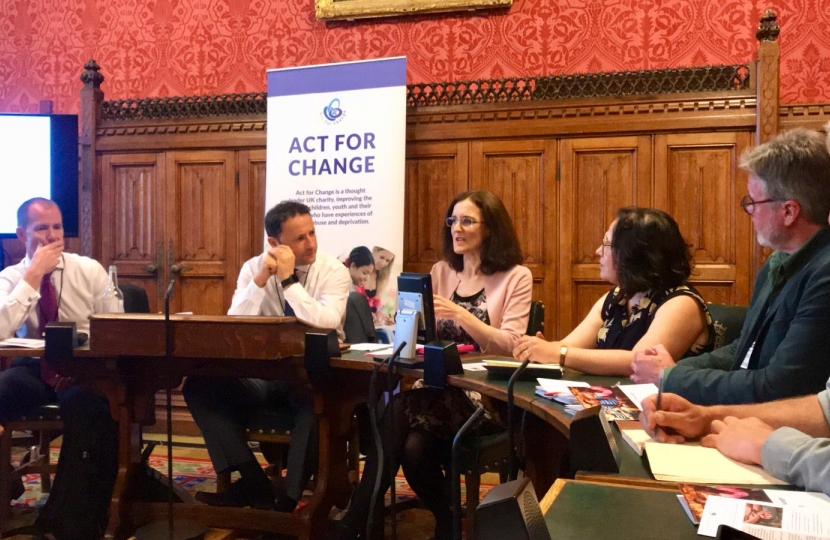 The event was timed to coincide with Mental Health Awareness Week and Theresa worked with her constituent, the internet broadcaster Keith Frazer, and the charity, Act for Change, to organise the project.

Act for Change provide help and support to children and young people who have experienced trauma, abuse and bereavement.

In her opening remarks, Theresa told the audience Mental Health Awareness Week was a good time to hold the talk and that tackling trauma and mental health issues could play a part in reducing serious violent crime.

“It’s intolerable that so many young people have lost their lives to the surge in knife crime,” she said.

“In January last year, I attended an emergency summit on violent crime hosted by the Home Secretary and the Mayor of London.

“Of course, there were issues that divided us, but we were unanimous in concluding that we needed a public health approach to tackling this crime menace on our streets.

“That means both a robust policing response - including effective use of stop and search - and tougher sentences for carrying a knife.

“But a policing response is not enough on its own. It is also vital to run effective programmes to address the reasons why young people get involved with gangs, drug dealing and crime.

“I hope we can all recognise that if we can get better at helping young men and women struggling with difficult and unstable family backgrounds, or with trauma and mental health concerns, that can be an effective means to divert them away from crime.

“Act for Change does inspiring work to enable troubled young people to cross a bridge away from an alienated ‘street warrior’ culture of gangs and drugs. The evidence is that this can play a valuable role in a strategy to tackle serious violent crime and keep our teenagers safe from harm.”

Those taking part in the event last Wednesday included Leah Misan, psychologist and founder of Act for Change, Commander Richard Smith from the Metropolitan Police, and Darren Johnson, the former head of a youth offending service.

Getting help for vulnerable people in Barnet during the Covid emergency

If you know someone who is having difficulty as a result of the Covid-19 lockdown, help and advice is available from Age UK and from Barnet Council using the following links and contact details:

Age UK are the charity leading the volunteer effort in Barnet: