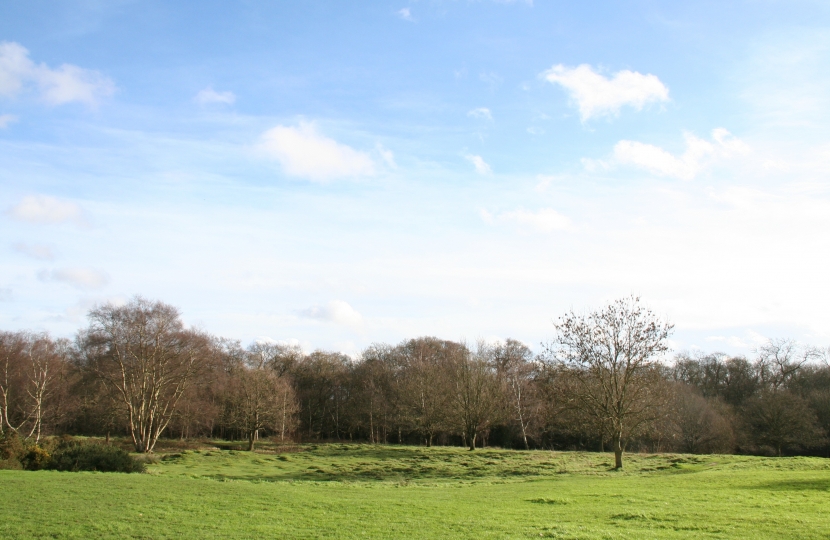 Focusing on an issue of longstanding interest to her, Theresa Villiers made a speech in Parliament yesterday on the importance of trees and woodlands and the benefits they provide to society. She emphasised the importance of protecting ancient woodlands from being lost as a result of development and also highlighted the value her constituents place on wooded areas such as Monken Hadley Common, Whitings Wood and Coppetts Wood.

The debate was tabled to allow MPs to discuss a report by the House of Commons Select Committee on Environment, Food and Rural Affairs “Forestry in England: Seeing the wood for the trees” (Hansard reference - Session 2016-17, HC 619).

In her speech to MPs, Theresa Villiers said: “This debate gives us an opportunity to highlight the significant importance of forests and woodlands not only to our environment, but to our quality of life, as hon. Members have pointed out. I was pleased to see that sentiment reflected in the report, in the Government’s response and in the evidence given to the Committee by witnesses.

My suburban constituency of Chipping Barnet illustrates that the debate is not just of interest or relevance to rural areas. There are a number of woodland areas in Barnet: we have woodland around Monken Hadley common that dates back hundreds of years—it may have been continuously wooded since the end of the last ice age. Coppetts Wood, at the other end of the constituency, used to be part of Finchley Common, the haunt of highwaymen in the 17th and 18th centuries. It underwent a spell as a sewage works, but was subsequently revived and renewed and is now a welcome public space. Whitings Wood between Arkley and Underhill brings us right up to date, because it was planted in 1996 and is now ably managed under the stewardship of the Woodland Trust.

A key goal for me as a Member of Parliament is the conservation of our natural environment. I warmly welcome the work that the Committee has put into the report, the strong commitment on the environment that the Prime Minister made today and the 25-year Plan that has been published.

Like others in this debate, I want to focus on ancient woodlands. I welcome chapter 6 of the report, which covers that area. I also strongly support the Conservative Manifesto commitment to strengthen protection for ancient woodlands in the planning system.

I recently had the pleasure of joining the all-party parliamentary group on ancient woodland and veteran trees, and I was alarmed to learn at the first meeting I attended that as many as 500 ancient woodlands across the country may be under threat.

I appreciate that in certain circumstances some loss of this valued habitat is unavoidable—for ​example, in relation to crucial major infrastructure projects of national significance—but I am alarmed that according to research by the Woodland Trust, current threats to ancient woodland include projects for caravan sites, leisure activities, waste disposal and, as we heard from the hon. Member for Penistone and Stocksbridge (Angela Smith), a motorway service station. It is hard to see how that kind of land use can possibly justify the destruction of irreplaceable ancient woodland.

Our planning system should provide that building over ancient woodland should be permitted only in wholly exceptional circumstances. I support the Committee’s call for more extensive and systematic measurement and recording of ancient woodlands so that we have a better understanding of what we have and how much of it is under threat. I hope the Minister will respond to those important recommendations.

A key goal for all of us who recognise the benefits of woods and forests is not just protecting what we have, but planting more trees. I therefore urge the Minister to ensure that the Government deliver on their commitment to plant 11 million trees during this Parliament, plus a further million in our towns and cities. I note the scepticism we have heard from some this afternoon and from some witnesses in the Committee’s inquiry on the likelihood of the Government being able to set us on a path to delivering the long-term goal of 12% forestation by 2060. DEFRA’s response to the Committee rightly indicates that the private sector will be crucial in delivering on that very long-term goal. I agree that it is important for the private sector to do more.

With that in mind, I hope the Minister will consider putting a renewed focus in the Government’s clean growth strategy on planting trees as carbon stores. My understanding is that companies can include trees planted abroad in their carbon accounts, but cannot claim a similar credit for trees planted in the United Kingdom. I hope the Government will consider changing that.

In other crucial decisions they will be making over the next few months, such as the replacement for the common agricultural policy, I hope that the Minister and Secretary of State will take into account the importance of woodlands and hedgerows. I appeal to the Minister to ensure that trees, hedges and small woods are better integrated into our new system of agricultural support.

In his speech to the Oxford Farming Conference recently, the Secretary of State said that he wanted sustainability and environmental goals to be at the heart of the UK’s new system of farm support after we leave the EU. I urge the Minister to ensure that that includes rewarding farmers for taking care of trees on their land and supporting them to add new trees, hedges and shelterbelts. It is important to bear in mind what has been said this afternoon and what is in the report about the importance of ensuring that the system for administering and applying for support payments is vastly simpler, more straightforward and more logical that the CAP it will replace.

In conclusion, as the evidence to the EFRA Committee showed, woods and forests provide a whole range of benefits to everyone in our society, including tacking climate change, reducing floods and improving air quality. As we have heard eloquently from a number of speakers, they also provide significant economic benefits.

As places of beauty and tranquillity, woods and forests can deliver significant and valuable public health advantages by providing opportunities for recreation, physical and ​mental relaxation and an escape from the pressures of life in modern Britain. Projects such as the northern forest illustrate the value we place on our woodlands, because it has captured the public’s imagination.

In preparing my remarks today, I was reflecting on the track record of my predecessor as Member of Parliament for Chipping Barnet, a wonderful man by the name of Sir Sydney Chapman. He was famed for his project, “Plant a tree in ’73”. It was one of the first large-scale environmental movements. It was followed by the less well-known, but equally well-named, “Plant some more in ’74”.

While Sydney is sadly no longer with us, the trees that he was responsible for planting will leave a green and leafy living legacy for decades and perhaps even centuries to come.

In future years, I hope this Government will be remembered for many positive things, but also for the trees and woodlands we planted as part of our commitment to be the first to leave the environment in a better state than we found it. We have the opportunity to do that. I urge the Minister and her colleagues to ensure that that happens."

The debate took place in Parliament's secondary debating chamber in Westminister Hall. The Minister who responded on behalf of the Government was Therese Coffee MP.