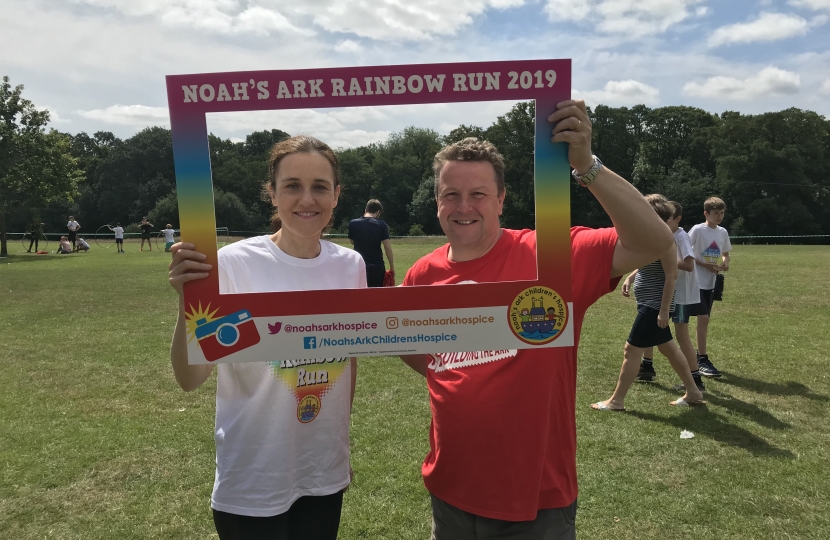 Chipping Barnet MP Theresa Villiers put on her trainers at the weekend to run 5km at the annual Rainbow Run in aid of Noah’s Ark Children’s Hospice.

Trent Park in Cockfosters was splashed with colour as over 200 people took part in the run to raise money for the much-loved charity.

Many of those taking part were families supported by Noah’s Ark.

Runners had the option of a 1.5km and 5km loop and they were showered with paint, creating a whirlwind of colour on the hottest weekend of the year so far.

The event raised tens of thousands of pounds for children with life-limiting and life-threatening conditions in north and central London. This is an especially important year for Noah’s Ark, as they prepare to move into their new purpose-built children’s hospice building in Byng Road in High Barnet.

“Many congratulations to everyone who took part in this race, which has become a great fixture in north London because of its splash of colour and, most importantly, because it is such a worthwhile cause,” said Theresa.

“Noah’s Ark does tremendous work for children and families who face deeply traumatic circumstances. I have huge admiration for the dedicated service of Noah’s Ark staff. I have been supporting this charity for many years.”

“I was delighted to hear the news that construction is more or less finished and that staff will be moving into the building very soon. It’s been a long journey to get to this point but I am certain the new facility will be world-leading in the standard of care and support it will provide.”