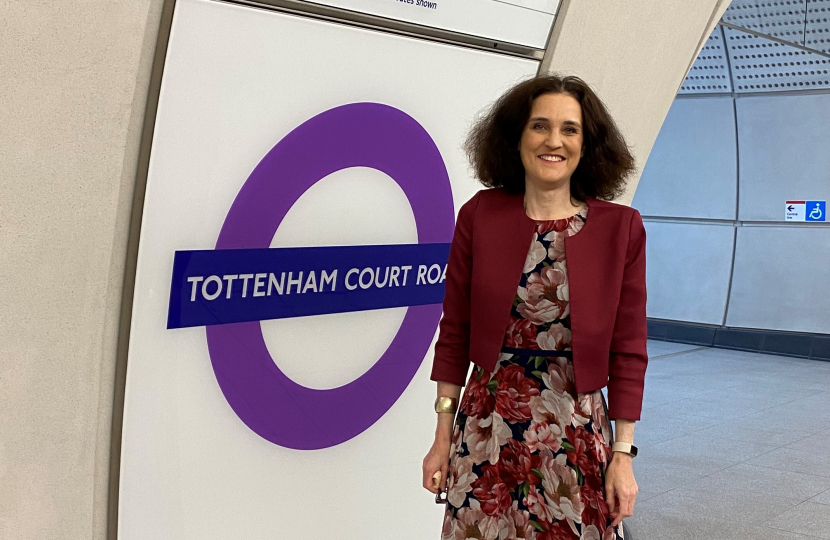 Welcome to my e-newsletter. The cost of living has been dominating debates in Parliament and the Chancellor last week announced a second major package to help people with their household bills.

Planning and development have continued to be big issues in the constituency and in my Parliamentary work. I spoke at a public inquiry on the future of Barnet House in Whetstone to object to the plan to make this eyesore building even taller.

As part of its Queen’s Speech programme, the Government published the Levelling Up and Regeneration Bill, including changes to the planning system. I had strongly objected to the idea of creating ‘Growth Zones’ where developers could build without planning permission, thus cutting residents out of any say on what is built. This was put forward in the 2020 White Paper “Planning for the Future”. I am happy to report that the proposal has now been dropped after I and back bench colleagues fought against it.

However, the Bill does seek to move key powers over planning policy from local councils to the Government and I am asking Ministers to scrap that too. I have met with the Housing Minister and the Communities Secretary to discuss these important matters and keep up the pressure for greater protection against overdevelopment.

I met the Campaign for the Protection of Rural England to discuss the Bill and also to hear about their work to enhance and protect the green belt. You can read their report “The Countryside Next Door” here.

My environmental work this month included discussions with a number of green NGOs about a crucial international conference on biodiversity – COP15. This has been repeatedly postponed because of Covid and I and other MPs are pressing for it to go ahead.

It was great to take part in an online discussion hosted by Cypriot youth group, Nepomak, with Cyprus Environment Minister, Klelia Vasiliou, to consider the work our two countries can do together on environmental issues such as plastics pollution in the ocean. Closer to home, I very much enjoyed a visit to last week’s fair on Totteridge Green in aid of the Darlands Nature Reserve and North London Hospice.

I try to keep in touch with businesses in my constituency, and I recently visited RS Locks in Russell Lane and Enterprise car rental in High Barnet. It was good to hear about the work being done by RS Locks with London boroughs to use the Government's Safer Streets Fund to help people make their homes more secure. Enterprise told me about the success of their car clubs to help people get around if they don't own a vehicle.

A third local business I have met up with is Book Club Buddies and I would encourage parents to check out their website (here) for information on their brilliant activities to inspire children and young people with a love of reading and books.

Lastly, I wish you all well with the Platinum Jubilee extended weekend. 70 years on the throne is a tremendous achievement and these Jubilee celebrations are a wonderful opportunity to thank Her Majesty for her incredible dedication and service.

Delivering help with the cost of living through our plan for a stronger economy
In the aftermath of recent elections, Theresa Villiers MP acknowledged that the Government needs to listen to the message from residents and provide a clearer plan to grow the economy and help people with the cost of living. She subsequently welcomed the additional package of support announced by the Chancellor pf the Exchequer. Read more....

Villiers seeks changes to Levelling Up Bill on planning
An outspoken critic of recent Government proposals on planning reform, your local MP has called for changes to the Levelling Up and Regeneration Bill to provide better protection against overdevelopment. Read more...

Plans for Whetstone tower block condemned
MP Theresa Villiers has asked a planning inquiry to turn down proposals for 260 flats at Barnet House by telling officials from the Planning Inspectorate that the scheme is even worse than the one thrown out four years ago. Read more....

Normal service returns to Northern Line Bank branch
Chipping Barnet MP Theresa Villiers has welcomed the Northern Line Bank branch fully reopening on schedule, following improvement work. She has been pressing TfL to keep to their promise to finish on time and she visited the Bank station construction site a few weeks ago to be briefed on progress. Read more....

Villiers formally opens Cairns Cup inclusive golf contest
Earlier this month, Theresa Villiers officially opened the Cairns Cup disability golf tournament between Europe and the USA. The five day event - modelled on the Ryder Cup – took place at the Shire golf club, just outside Barnet. Theresa was asked to do the honours by her constituent Kris Aves, who is part of the Europe team. Read more....

"I very much understand the distress and anger felt about the continuing division of the island. Those who fled from their homes in 1974 continue to suffer greatly. The brutal invasion of Ukraine by Russia is a reminder of the horrors of war and its devastating impact on the civilian population. Read more....

Theresa’s next diarised surgery takes place from 1430 to 1700 on Friday 10th June at her constituency office at 163 High Street. This is slightly later than normal because the regular Saturday morning surgery has been moved to avoid clashing with the bank holiday weekend.

Constituents wishing to see Theresa or her staff will need to make an appointment in advance. You will NOT be seen if you turn up without a pre-booked appointment. Bookings for face-to-face meetings or Zoom calls can be made using the contact details set out in the preceding paragraph.