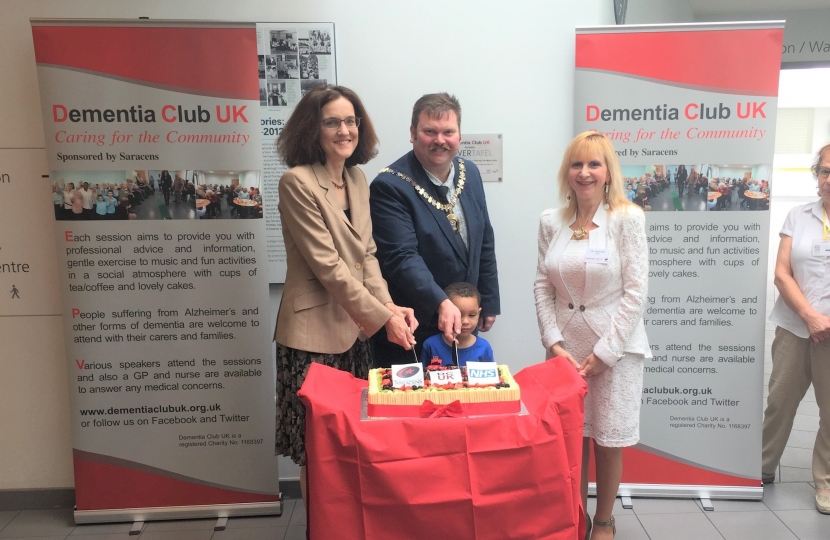 Chipping Barnet MP Theresa Villiers has helped officially launch a new technology which is helping people in her constituency cope with dementia.

The charity installed the Tovertafel earlier this year and Finchley Memorial Hospital is one of the first hospitals in London to have one. To mark the occasion, Theresa joined Barnet’s Mayor, Reuben Thompstone, in cutting a celebratory cake.

The Tovertafel helps those with mid to progressed stage dementia be more active. It consists of a series of interactive games projected on a table that players can reach out towards and the lights subsequently respond to their hand and arm movements. It also benefits people with learning disabilities and children and adults with autism. The games can be played independently or with family and friends.

“It is very good news that we have this award-winning and innovative piece of technology available locally to help people cope with dementia. I was honoured to be invited to the launch,” said Theresa.

“It was fascinating to see how the Magic Table operates. It’s hard to describe - it’s rather like an interactive white board projected on to a table, allowing dementia sufferers to play simple computer games. The team behind this new invention say it creates ‘moments of happiness’. After seeing constituents respond so well to the Tovertafel at the launch event, I think they’re right.”

“This sort of help will become more and more important because the numbers suffering from dementia are set to rise to over one million by 2025. I pay tribute to Lisa Rutter for making this all possible.”

Cllr Lisa Rutter has been running Dementia Club sessions since August 2013 when she opened the first dementia café in Barnet at Finchley Memorial Hospital. This was made possible by funds that Lisa raised when she was Mayor of Barnet in 2011/2012. There are now seven dementia clubs running in the Borough of Barnet and one in Borehamwood. Dementia Club UK has received generous support from sponsors such as Nigel Wray of Saracens.