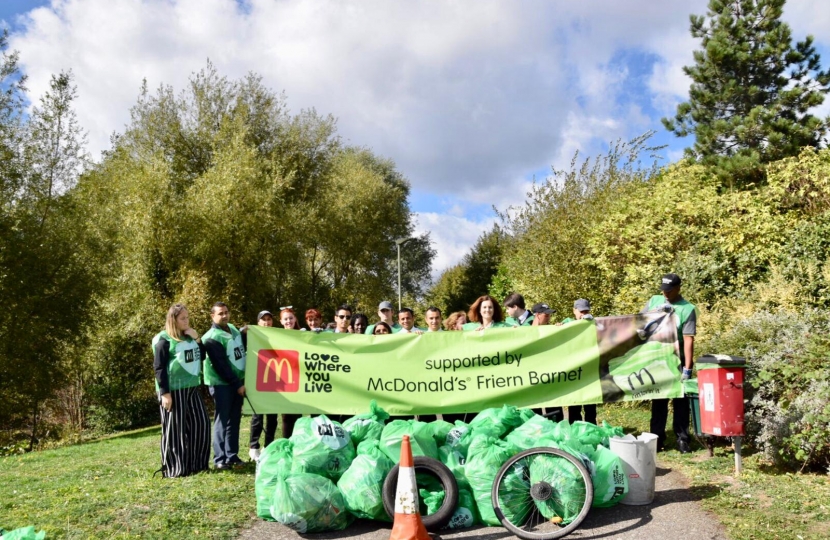 Chipping Barnet MP Theresa Villiers joined the staff of McDonalds Friern Barnet in a volunteer litter-pick in the South Friern area on Friday. Theresa and the team of McDonalds employees collected multiple bags of rubbish from parkland and residential roads around the Friern Bridge retail park.

Theresa said “After tabling a debate in Parliament about litter, I decided to take my campaign against litter to the streets of my constituency. I regularly report litter problems to the council to get their help in clearing up, but I decided to give a hand myself by asking McDonald’s to help organise a litter-pick.”

“It is depressing to know that some people care so little about their local environment that they will throw rubbish on the ground rather than putting it in a litter bin or taking it home. Littering is a deeply anti-social thing to do.”

“I would like to thank the team McDonalds for getting stuck into efforts to help clean up our local environment. I would particularly like to thank Atul Pathak, the franchise owner for McDonald’s in Friern Barnet, for making this litter pick event possible.”

Theresa raised the issue of litter in a Westminster Hall debate she tabled in July after a constituent complained that Highways England aren't doing enough to clear litter around the South Mimms junction of the M25. She managed to draw national media attention to the debate when she revealed she had found a Crunchie wrapper dropped in the House of Commons Chamber, expressing her horror that littering is even taking place in the mother of Parliaments.