Keep East Barnet and Brunswick Park in Chipping Barnet! Have your say on new parliamentary boundaries 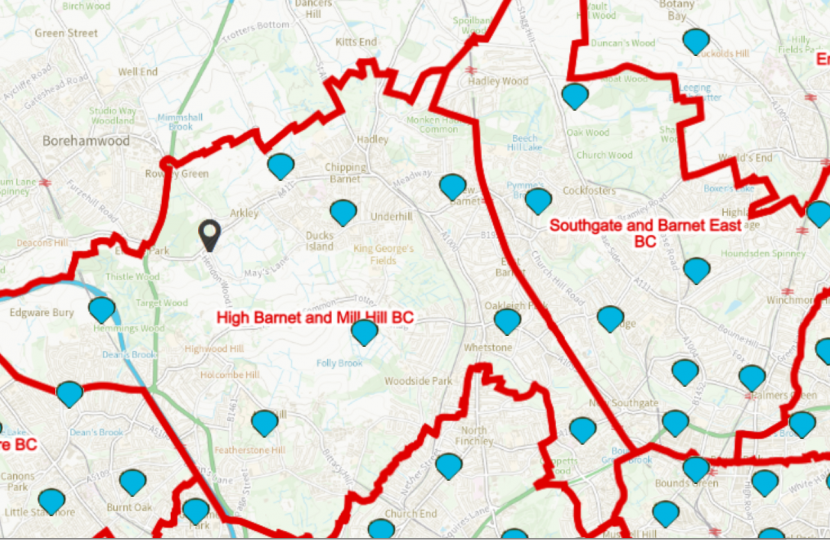 The Boundary Commission for England is consulting on a new map for parliamentary constituencies. They propose creating a “Mill Hill and High Barnet” seat which cuts out East Barnet and Brunswick Park wards and attaches them to a new “Southgate and Barnet East” constituency, falling mainly in the borough of Enfield.

I am campaigning for these two wards to remain in the Chipping Barnet constituency. I do not believe they should be tacked on to a seat made up primarily of Enfield wards. We should keep our community together.

If you want to keep these areas in a Barnet constituency, please let the Boundary Commission know by responding to their consultation at: https://www.bcereviews.org.uk/.

How to have your say: To take part you need to enter a post code into the search box. If you live locally, that can be your home post code. If you live elsewhere, but want to support the campaign, you can use any local post code (eg EN4 8HG). You then need to click on the “Make a comment” button, then on the constituency map, to bring up a comment box. There is a word limit for the comment box, but if you want to send more detailed representations, you can save them in as a PDF or Word document and submit them using the “Add files” option towards the bottom of the page. You are then given a choice as to whether your name is published by the Commission as someone who has responded to the consultation.

The consultation closes on 4th April so time is running out to have your say! Please send off your representations to the Boundary Commission TODAY to let them know you want your neighbourhood to stay in Barnet!!! ACT NOW IF YOU DON'T WANT TO BE SHIFTED INTO AN ENFIELD CONSTITUENCY.

The key point to make is that there are strong communities ties between the areas covered by East Barnet and Brunswick Park wards (including New Barnet) and the rest of what is currently the Chipping Barnet constituency. In particular, it would be artificial and disruptive to split these two wards away from from Barnet Vale, Hadley, High Barnet and Whetstone. The effect of this would be that New Barnet would be split between two different parliamentary constituencies.

Explaining your own views of these community ties has the greatest impact but here are a few points which you might wish to consider including in your representations: