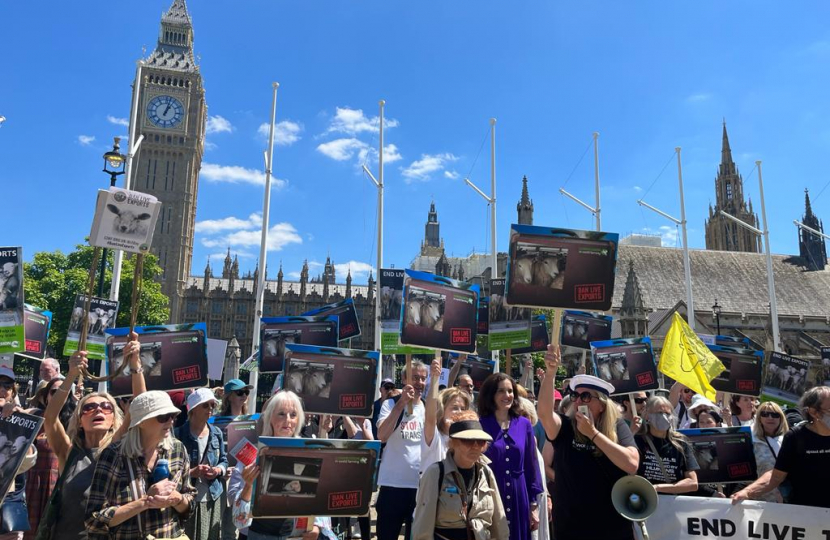 Welcome to my June e-newsletter.

During this month we have been beset by tube and rail strikes and I have condemned these in Parliament. I am also strongly opposing the proposal by the Mayor of London to extend the ULEZ zone out to the Greater London boundary. Imposing new charges on my constituents at a time of such serious cost of living pressure is just not acceptable.

I would urge you to have your say by responding to the Mayor’s consultation on this issue at https://haveyoursay.tfl.gov.uk/cleanair.

My environmental work has continued and I have called for the Government to investigate whether Toyota had used an illegal “defeat device” to cheat emissions tests, along the lines of the VW scandal a few years ago. I also joined a Compassion in World Farming rally in Parliament Square as part of a worldwide day of action to end live animal exports. I have been campaigning for many years for a ban on this cruel trade.

I took part in the second reading debate on the National Security Bill. As a member of the Parliament’s Intelligence and Security Committee, I believe that this piece of legislation, which modernises our laws on espionage, is very important for tackling threats posed by hostile states.

Other matters on which I have spoken in Parliament over the past month include: planning reform and scrapping excessive house building targets; phasing out the use of cages for laying hens; boosting the economy through post-Brexit regulatory reform; promotion of UK food exports; expanding the NHS workforce; and stopping the ULEZ expansion and the Mayor’s proposals for pay-per-mile road charging.

I also tabled a debate antisemitism in football. It is shocking that anti-Jewish racism is still prevalent in football despite attempts to stamp it out. I have campaigned against antisemitism for many years and welcomed the opportunity to shine a light on the problem in football by leading what I believe is the first ever debate in the House of Commons specifically focused on this issue.

On a more cheerful note, I was pleased to welcome back some successful events to my constituency after Covid restrictions have disrupted so many activities. The Medieval Festival returned with more re-enactors than ever before, telling the story of what happened when the forces of York and Lancaster clashed on a foggy Easter Sunday morning just outside Barnet in 1471.

Summer Soulstice was back after a two-year Covid absence. This raises thousands of £s for local charity, Cherry Lodge Cancer Care. People from around the borough were once again able to gather together at the RAF Museum in Colindale on Armed Forces Day to pay tribute to our brave servicemen and women. And, of course, our streets were filled with bunting and parties as we celebrated 70 years of dedicated service by Her Majesty the Queen.

Villiers leads Parliamentary debate condemning antisemitism in football
Antisemitism has no place in football, Theresa Villiers has told MPs, and clubs, the Premier League, the FA, and the police must do more to stamp it out.

The Chipping Barnet MP held a Westminster Hall debate into the issue last week. She tabled the debate following a discussion with Action Against Discrimination, who have been highlighting this problem for many years. Read more....

Villiers demands air quality probe into Toyota
Theresa Villiers MP has asked the Government to investigate whether motor giant Toyota used ‘defeat devices’ to allow them to emit illegal levels of air pollution from trucks sold in the UK.

She has written to transport secretary Grant Shapps asking him to look into whether Hino Motors Limited – a division of the Japanese car manufacturer – used the technology to give false emissions readings and endanger the British public. Read more....

Animal welfare petition to "End the Cage Age" debated in Parliament
Chipping Barnet MP Theresa Villiers has called for progress in phasing out the use of cages in agriculture, but with high welfare standards included in trade deals to safeguard UK farmers from unfair competition from lower welfare jurisdictions. Read more....

Battle on planning reform continues
Local councils losing powers to decide what is built in their areas is an “aggressive power grab” by the Government and should be dropped, Theresa Villiers has told MPs.

She was highlighting that the Levelling Up and Regeneration Bill would allow the Secretary of State to set Development Management policies at a national level. These would override local plans, she told the House of Commons, and worsen backbench concerns about a lack of control at council level. Read more....

Theresa’s next diarised surgery takes place from 1015 to 1200 on Saturday 2nd July at her constituency office at 163 High Street. Constituents wishing to see Theresa or her staff will need to make an appointment in advance. You will NOT be seen if you turn up without a pre-booked appointment. Bookings for face-to-face meetings or Zoom calls can be made using the contact details set out in the preceding paragraph.