July e-newsletter from Theresa Villiers MP – Have your say on ULEZ expansion TODAY! 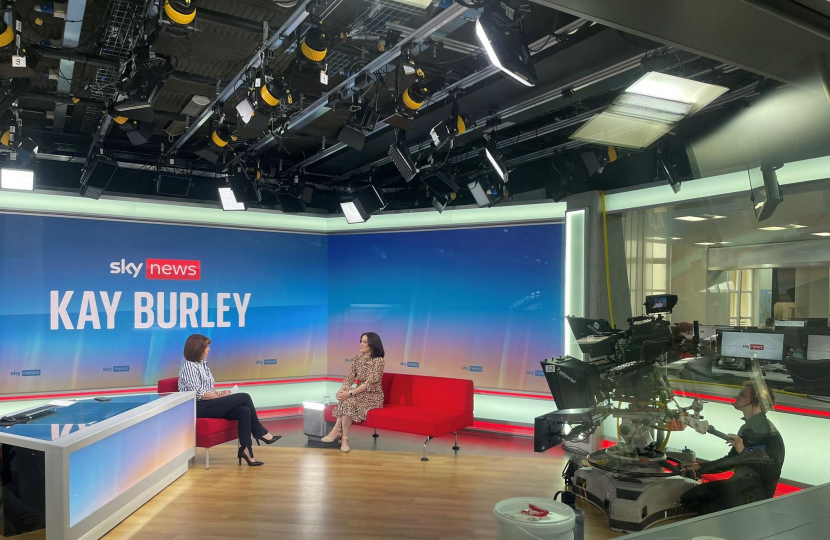 Welcome to my July e-newsletter.

There can be no doubt that it has been a turbulent few weeks since my last email update. In the early days of July, Prime Minister Johnson’s position become untenable. Whilst his premiership delivered significant achievements, not least of which was securing an extensive free trade deal with the EU and delivering a vaccination programme that was one of the fastest in the world, the grave misjudgments made over Partygate proved fatal.

I am backing Rishi Sunak to be the next Prime Minister, as the candidate with the best plan to get us through difficult times ahead caused by the return of inflation to the global economy. More information about him is available here, or you can click here to fill out my survey and let me know your views on the leadership race.

Despite the political upheavals which have been taking place, I was able to raise several issues in Parliament this month including: the cost of living; ambulance waiting times; scrapping excessive housing targets; resolving problems with the Northern Ireland Protocol; the new Women’s Health Strategy and endometriosis care; the COP15 conference on restoring nature and protecting wildlife; preventing litigation from being used oppressively to shut down democratic debate; and adopting a tough approach on Iran’s nuclear programme and the JCPOA deal.

I also asked a PMQ highlighting concerns about crime after the Metropolitan Police went into special measures. In this question, I once again called on the Mayor to save Barnet police station.

I have continued to speak out to condemn the rail strikes causing disruption to commuters using the GTR services from New Barnet, Oakleigh Park and New Southgate.

I attended the annual lobby of Parliament on Cyprus. As I have done for over two decades, I pledged my strong support for a free and united Cyprus. As an MP for a constituency which is home to a large British Cypriot population, I have been present at this event for many years.

In other news this month, I was pleased to see the drug Trodelvy recommended by NICE for treating women with breast cancer, a campaign in which I have been involved.

I was also honoured to be a member of the UK Parliamentary delegation to a major international conference hosted by the Government on Freedom of Religion and Belief. This attracted delegates from around the world and I attended sessions highlighting concerns about young Christian and Hindu girls being subjected to forced conversion.

I welcomed a group of young constituents for a three day work experience programme in my constituency office and in Parliament. I have been running regular street surgeries on Saturday mornings and will be kicking off my summer campaign week on Monday. This is time when I step up my contact with constituents, heading out each evening to talk to as many people as possible on their doosteps about what is important to them.

Many are worried about the Mayor of London’s proposed expansion of the ULEZ to cover all of Barnet. If you haven’t already responded to the TfL consultation on expanding ULEZ charging, please click here to submit your views to the consultation. This is the wrong scheme at the wrong time. New taxes on driving in the suburbs should not be introduced at a time when people are struggling with rising household bills. The consultation closes TOMORROW!

Stop the ULEZ expansion - Tell the Mayor your views TODAY!
Chipping Barnet MP Theresa Villiers is urging residents to submit views on the London Mayor's proposed Ultra Low Emission Zone (ULEZ) expansion with just a day to go before a consultation ends. Theresa has been campaigning against the plan which would put the whole of Greater London in the zone from August 2023. Read more....

Campaign continues against overdevelopment at Victoria Quarter
Your local MP has told a planning appeal hearing that proposals for 539 flats at Victoria Quarter would set a dangerous precedent for future schemes in her Chipping Barnet constituency. Theresa said Barnet Council’s refusal earlier this year to grant approval for the construction of the flats in 13 separate blocks of up to seven storeys was the right decision. Read more....

Villiers backs Rishi
I am backing Rishi Sunak to become the next leader of the Conservative Party and Prime Minister. In my view, he has the right long term economic plan to get us through difficult times ahead: tackle inflation, grow the economy and then reduce taxes. Read more....

School building in Underhill to become new SEND facility for Barnet children
Chipping Barnet MP Theresa Villiers has welcomed the news that Grasvenor Avenue Infants School site will remain in educational use after she asked for it not to be sold to developers. Barnet Council confirmed this week that the buildings will be repurposed to provide satellite accommodation for Northway Special School. Read more....

Theresa’s next diarised surgery takes place from 1430 to 1700 on Friday 6th August at her constituency office at 163 High Street. Constituents wishing to see Theresa or her staff will need to make an appointment in advance. You will NOT be seen if you turn up without a pre-booked appointment. Bookings for face-to-face meetings or Zoom calls can be made using the contact details set out in the preceding paragraph.