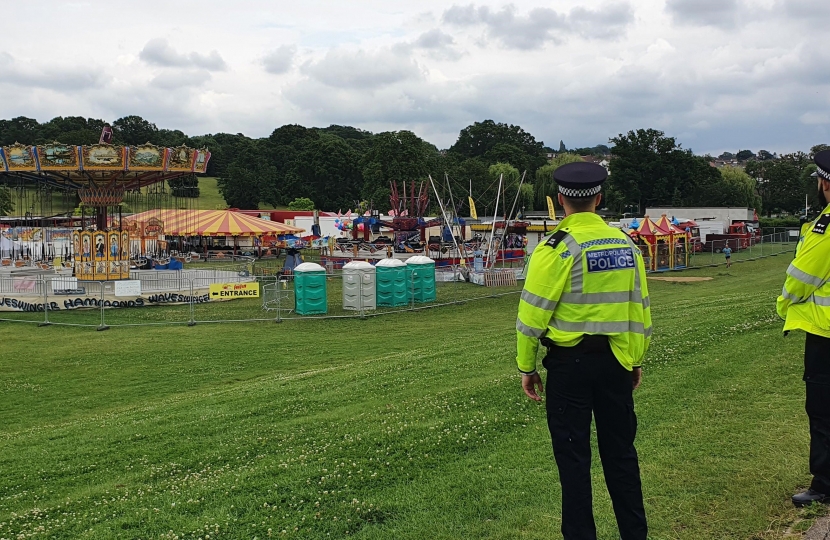 I’ve continued my series of mobile ‘street surgeries’ talking to people on their doorstep to hear their concerns. Crime remains a key issue and I held urgent discussions with local police following the stabbing which took place in Oak Hill Park. Since 2019, police officer numbers in London have risen by 1369. Barnet has received a number of these and the size of the Met will continue to increase until the Government meets the national target of 23,500 additional officers. But clearly more work needs to be done to tackle burglary, car crime and violence in Barnet. I will continue to campaign for more police for our area.

I have stepped up my campaign against the plans by the Mayor of London and TfL to build over station car parks now that a planning application has been submitted to do this at Cockfosters tube station. I am encouraging my constituents to have their say by submitting an objection. You can find details of how to do this on my website here. An application to build over the car park at High Barnet station is expected over the coming weeks and I shall be fighting against that too.

I was interviewed for the Week in Westminster on BBC Radio Four at the weekend on why I believe that the Government needs to think again about its planning reforms. You can listen to the programme on the BBC Sounds website here.

Turning to Covid matters, I appreciate the anxiety felt about the increase in case numbers. However, the continued success of the vaccination programme has clearly weakened the link between the number of infections and hospitalisations. People who have been double-jabbed continue to have high levels protection against serious illness, even if they catch one of the new variants of the virus. Even though almost all the legally binding Covid restrictions have now been lifted, the Government continues to advise caution and continued wearing of face coverings in public places. Further information is available on the Government’s website at:

Issues I have raised in Parliament over the last few weeks include (i) supporting the NHS and highlighting how vital it is to expand GP services; (ii) calling on the Mayor to scrap transport schemes in central London which are causing congestion by excluding cars, vans and taxis from key routes and roadspace; (iii) urging Ministers to allow hymns to be sung in church again; (iv) calling for rapid implementation of Government promises on nature recovery and conservation. You can read more on my Hansard page here.

Villiers calls for police action to reassure residents after stabbing in Oak Hill Park
Barnet MP, Theresa Villiers, sought an urgent meeting with the police to discuss the stabbing which took place at the funfair in Oak Hill Park, in East Barnet, on Friday 9th July. She was in the park the following morning and spoke to the local police Safer Nighbourhood Team who were patrolling there. She was later able to meet Police Inspector Tony Toporowskyj to find out more about what happened and to urge him to provide reassurance patrols around the neighbourhood. Read more....

Barnet MP speaks up on NHS reforms
Theresa Villiers, MP for Chipping Barnet, took part in a debate this month on reforming the way the NHS is organised to integrate health and social care services more effectively. Theresa has campaigned in support of NHS services throughout her 16 years in Parliament. Read more....

Save Cockfosters!
Chipping Barnet MP, Theresa Villiers, has strongly condemned a planning application submitted by the Mayor of London to build tower blocks over the car park at Cockfosters tube station.

“These proposals are truly appalling”, the MP said, “Blocks of up to 14 storeys would be completely wrong for this suburban setting, right next to the important heritage sites of Trent Park and Cockfosters station. The buildings would amount to a massive urbanisation of the area, changing its character forever. Cramming 351 flats into the site, with no parking provided for new residents, would leave neighbouring streets packed with overspill parking.” Read more….

Villiers calls for freedom and unity for Cyprus
On the eve of the 47th anniversary of the Turkish invasion of Cyprus, Theresa Villiers has issued the following statement. She has campaigned for many years in support of a negotiated settlement in Cyprus and her Chipping Barnet constituency is home to many British Cypriots:

“I am unwavering in my support for Cypriots in their efforts to reunite their island. I pledge that I will continue to work to keep Cyprus on the agenda in Parliament, alongside colleagues from all parties. I want to express once again my solidarity with my British Cypriot constituents in their struggle for freedom, justice and unity for Cyprus.” Read more….

Hedgehogs hit the headlines
Theresa Villiers has called for a change in planning laws and more Government action to protect wildlife habitats if the country is to halt the decline of hedgehogs. Speaking in a debate in Parliament on the endangered mammals, Theresa told MPs that the much-loved animal has recently been added to the IUCN red list and designated as vulnerable, with an appreciable risk of extinction within 10 years. “There is a need for urgent action, and I want to press the minister to enhance protection for hedgehogs,” she told MPs. Read more….

Face-to-face surgery meetings have resumed, but Zoom calls are also available as an alternative. Regular surgery times are suspended for August but, in appropriate cases, surgery appointments are available on request.

Constituents wishing to see Theresa or her staff will need to make an appointment in advance. You will NOT be seen if you turn up without a pre-booked appointment. Bookings can be made using the contact details set out above.

To comply with continuing Covid guidance and avoid too many people gathering in the constituency office at one time, the waiting room which is normally available during surgeries remains closed. Constituents will need to arrive at the time of their appointment and may be asked to queue outside if they are early, or if there are delays to the appointment schedule. We apologise for this inconvenience, but it is necessary to maintain cautious approach to Covid and avoid crowding people together unnecessarily.