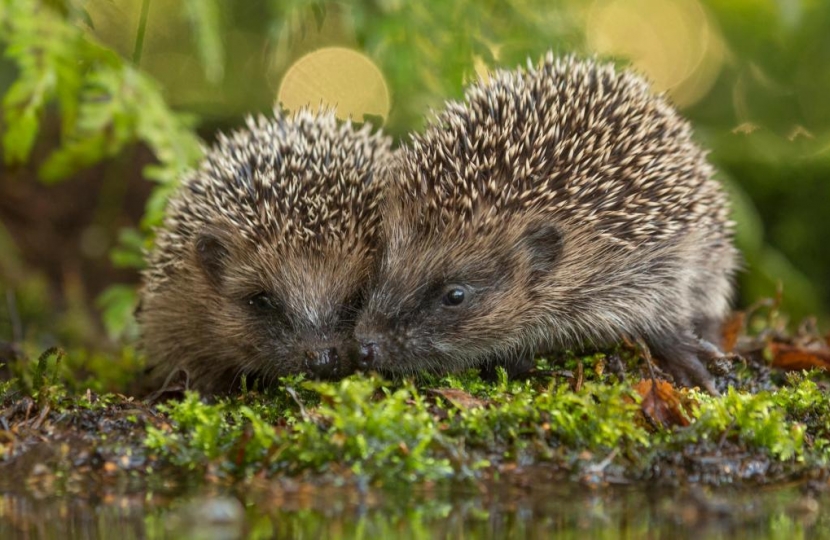 Chipping Barnet MP Theresa Villiers has called for a change in planning laws and more Government action to protect wildlife habitats if the country is to halt the decline of hedgehogs.

Speaking yesterday in a debate in Parliament on the endangered mammals, Theresa told parliament the much-loved animal has recently been added to the IUCN red list and designated as vulnerable, with an appreciable risk of extinction within 10 years.

“There is a need for urgent action, and I want to press the minister to enhance protection for hedgehogs,” she told MPs.

“Planning rules need to be changed to require the presence of hedgehogs to be taken into consideration when deciding whether to grant permission for development.

“Most important of all, I urge the Government to include hedgehog habitats in their extensive programme of nature recovery. There can be no doubt that decline in habitats is a key driver in the loss of hedgehogs. We need the biodiversity net gain provisions of the Environment Bill to be implemented so that a new income stream is created for protecting wildlife habitats. And I want to see councils also encouraged to include hedgehog recovery in the Local Nature Recovery Strategies which the Bill will require them to establish.”

The former Environment Secretary championed many of the nature protection measures that could help hedgehogs when she was in office, and she added: “Of course, I note the efforts by Natural England and DEFRA to create a national nature recovery network, which is a further, crucial opportunity to alleviate the pressure on the vulnerable creatures."

“Connected wildlife corridors can make a huge difference to the recovery of the species.”

Theresa also said that some modern farming practices had made survival more difficult for hedgehogs.

“The Environmental Land Management schemes, which will replace the European Union’s Common Agricultural Policy, should aim to restore hedgerows and habitats to give our hedgehogs a Brexit dividend,” she said.

“The Government has a stronger commitment to nature recovery than any of their predecessors ever before. When they set what I hope will be a really ambitious 2030 target for species conservation, I urge them to ensure that a thriving hedgehog population is included in that as a very important goal.”

Theresa had the opportunity to trail the debate during a review of the news on BBC Radio Four's Broadcasting House on Sunday.