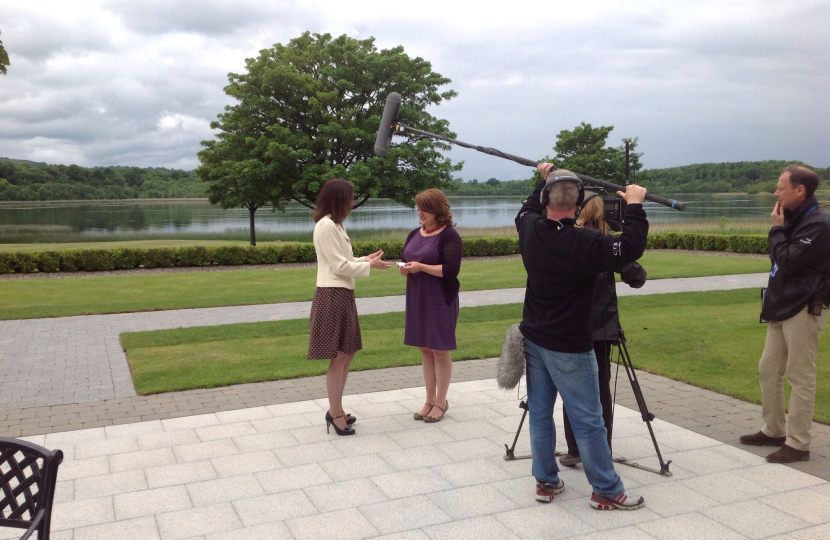 With attention in the media and Parliament focused on the Foreign Secretary's announcement that the Government would bring forward a Bill to tackle problems with the Northern Ireland Protocol, Theresa Villiers was involved in a range of media interviews on this issue with the BBC, Sky, and other outlets. She also wrote this article for the House Magazine and Politics Home website:

"The Northern Ireland Protocol is a source of deep concern amongst many in Northern Ireland’s unionist community. The political instability it is causing is the primary reason why a devolved Government has not been formed following the recent assembly election.

The EU have taken a rigid approach and refused to go past a narrowly drawn negotiating mandate. Apart from a few minor concessions, it continues to demand that checks on goods and food transported from Great Britain to Northern Ireland are the same as those designed for shipments into the EU from countries around the world, many of which lack the rigorous regulatory standards we have in the UK.

The Chief Vet in Northern Ireland predicted that imposition of the full scale regime contained in the Protocol, without the grace periods currently in place, would mean that the number of food compliance certificates required in the Northern Ireland could soon almost match the total processed in the entirety of the EU. This is entirely disproportionate and violates trade rules which provide that border-related checks and controls must be best on evidence and risk.

There have been months of UK-EU negotiations without success. The Government is right to bring forward legislation to enable it to act unilaterally to amend the key elements of the Protocol.

The Bill the Government is expected to publish would protect the integrity of the EU internal market, but would also address many of the practical and political concerns which have been expressed about the Protocol and the division it is causing within the union of the UK and our own internal market.

A principle already present in the Protocol is that goods ‘not at risk’ of entering the EU single market should not be subject to full customs compliance. At the heart of what Foreign Secretary Liz Truss looks set to propose is to use this principle as a starting point to create an enhanced ‘green channel’. If properly implemented this could mean that businesses whose goods or food are destined for consumption in Northern Ireland, not the south, could be almost wholly unaffected by the Protocol and could operate in accordance with domestic, not EU, regulatory rules.

This is a reasonable offer to the EU and is accompanied by a willingness to share very extensive information with them about trade across the Irish Sea to provide confidence that leakage of non-compliant goods into the Republic of Ireland can be detected and stopped when it occurs. Done properly, these proposals would deliver a set of arrangements which is as compliant (or potentially more so) than the rest of the EU’s external border.

This does not amount to ripping up the Protocol. To those that say “you signed it, you must accept the consequences” I would point out that the Protocol itself assumes that it may be replaced. It was negotiated under the Article 50 process which, as a matter of EU law, cannot be used to agree permanent arrangements. And the Protocol contains safety valve provisions which require the parties to look again at its terms in the event that it is leading to trade diversion or political instability. It clear that both of those are happening.

The litigation on the Protocol has not yet concluded, but there is every indication from judgements already handed down that its effect is a partial repeal or suspension of core elements of the Articles of the Acts of Union of 1801 – one of the foundational statutes of our union and our Parliament.

Yet this has taken place without cross-community consent. Every unionist who won an Assembly seat in the recent election opposes the Protocol in its current form. By bringing forward legislation for a pragmatic compromise which relieves business in Northern Ireland of the great majority of the burdens the Protocol currently imposes, and yet still safeguards the EU internal market, the UK Government is acting to safeguard the integrity and cohesion of our country.

I would encourage them to publish a robust Bill and take the technical steps needed to start to put into operation the new arrangements they have been promising. I hope that negotiations with the EU can be unblocked but, if not, Ministers must be prepared to act unilaterally."

Theresa wrote a further article on the Northern Ireland Protocol for the Daily Telegraph which you can read here: