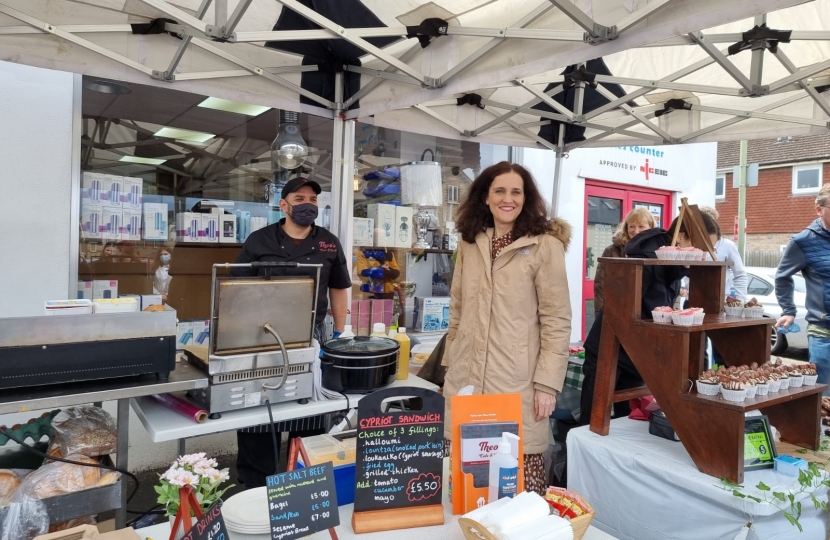 Welcome to my May e-newsletter. It has been great to see the vaccination programme continue so successfully. Nearly 39 million people have had their first jab and 24 million are now fully protected with both doses. The UK has one of the highest rates of vaccine uptake and enthusiasm of any country in the world.

This has opened the way for pubs and restaurants to re-open. With my #BackBarnet #ShopLocal campaign, I am continuing to encourage everyone to support local businesses as they finally open their doors after months of restrictions. The hospitality sector is still operating at less than full capacity because of Covid restrictions. In Parliament I have questioned Ministers on the plan for full re-opening on 21st June.

I’ve had environmental matters very much at the forefront of my work in recent weeks. In a speech in a debate on new environmental laws I highlighted the importance of measures to tackle the worrying decline in nature and biodiversity. I also met up with WWF and Sky Ocean Rescue to discuss the action needed to ensure the ocean can recover from plastics pollution and other threats to marine wildlife.

Campaigning against radical changes proposed to the planning system has continued to be a high priority for me. I spoke out against the Government’s Planning for the Future white paper on BBC Politics London (available here the BBC iPlayer) and also published an article on this issue in The Times Red Box column which you can read here.

Many constituents have been in touch about the conflict between Israel and Hamas. It is of course a great relief that a ceasefire has brought an end to the loss of life. I have strongly condemned recent antisemitic incidents. I have been in touch with the Home Secretary and the Police Minister to emphasise the crucial importance of action against anti-Jewish racism.

MP calls for action to protect the ocean
Theresa Villiers, MP for Chipping Barnet has met representatives of WWF and Sky Ocean Rescue to discuss their campaign to restore and revive our oceans and marine life. Theresa is a strong supporter of action to tackle plastics pollution in the sea and other measures to safeguard the marine environment. Read more…

Campaigning for nature and wildlife conservation
Your local MP, Theresa Villiers, praised a major package of measures to protect nature being taken forward by the Conservative Government, when she spoke in the debate in Parliament on the Environment Bill. Read more…

Barnet MP calls for rethink on planning reforms
MP for Chipping Barnet, Theresa Villiers MP set out serious concerns in Parliament about the reforms proposed in the Planning for the Future white paper. She reiterated this on BBC Politics London. Read more…

Villiers condemns rocket attacks on Israel
Theresa Villiers MP has issued the following statement on the situation in Israel and Gaza. “I condemn the rocket attacks by Hamas on Israel. Hamas is a proscribed terrorist organisation and I support the right of Israel to defend itself against these attacks.” Read more…

Queen’s Speech programme to pave the way for economic recovery
Theresa Villiers has welcomed the package of measures announced in Her Majesty’s Gracious Speech to drive recovery from the economic damage done by the Covid outbreak. Read more…

Whilst social distancing rules remain in place, all Theresa’s surgeries will be appointment-only and most meetings are taking place via Zoom. The next surgery is on Sat 5th June starting at 2pm. Anyone wishing to see Theresa or her staff will need to make an appointment in advance. You will NOT be seen if you turn up without a pre-booked appointment. Bookings can be made using the contact details set out above.