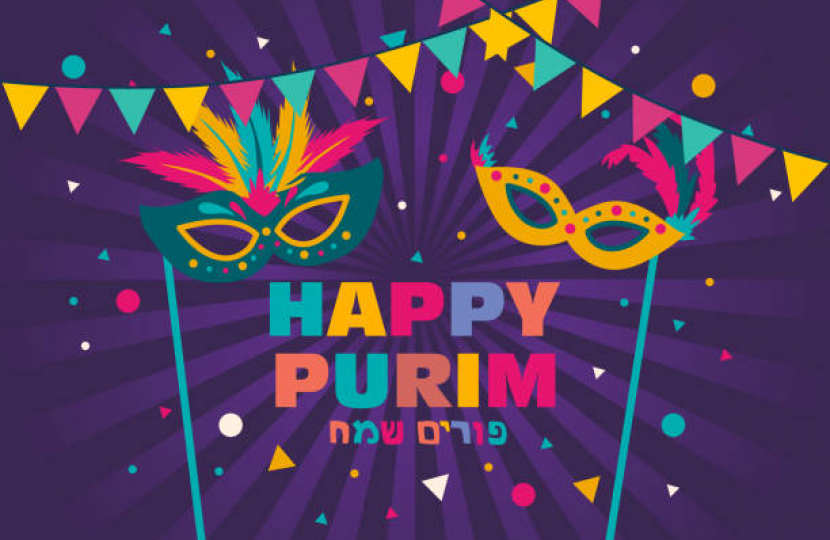 “To the Jewish community in Barnet, and around the world, I would like to wish you all Chag Purim Sameach at this special time of the year. I am so pleased that the lifting of Covid restrictions means that Purim celebrations can go ahead in the normal way after the constraints of the pandemic.

At this time of conflict in the world, Purim’s inspirational message of hope and courage contained in the biblical story of Esther is something we should all take heart from. Through her brave actions, Queen Esther saved the Jewish people from extermination at the hands of Haman. Esther's example shows us all that even at difficult times, individual acts of kindness and compassion can have a positive effect on the wider community. Happy Purim!”

The festival of Purim is seen as one of the happiest and most colourful days of the Jewish calendar as members of the community come together to celebrate salvation from near destruction in ancient Persia about 2,300 years ago. Haman, the chief adviser to the Persian King, had planned violent attacks on Jewish people, with the date for the killings to be determined by the casting of lots. Queen Esther's intervention this was prevented.

Purim is normally marked by dressing in costumes and fancy dress, parties and carnivals, public readings of from the Book of Esther, and the eating of special triangular shaped pastries called Hamantaschen.