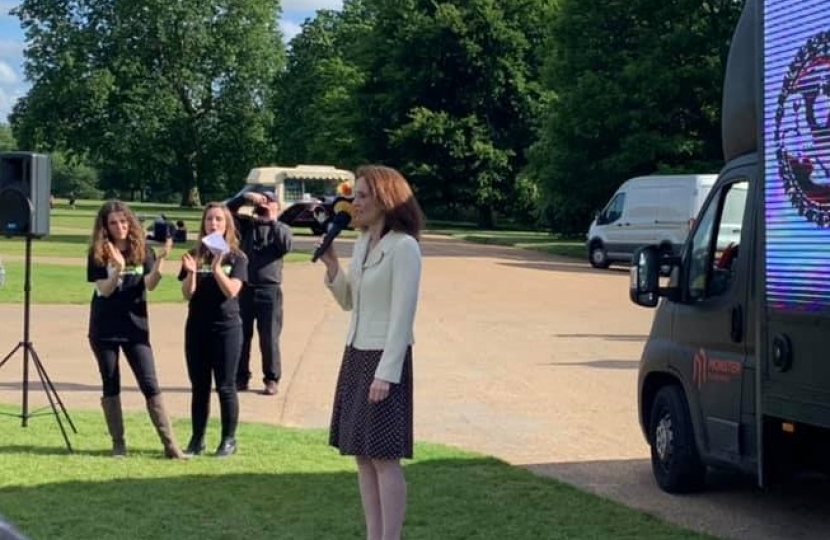 Responding to recent emails on a Petitions Committee debate in Parliament on animal sentience and the use of cages in farming, Theresa Villiers has issued the following statement on her commitment and campaigns on animal welfare:

"I have a track record going back nearly two decades of working for more compassionate treatment of animals, including a long-running campaign to end the live export of animals for slaughter. The Government is also committed to the highest standards of animal wellbeing.

There can be no doubt that animals are sentient and can experience pain. This fact underlies the extensive legislation we have in place in this country to outlaw cruelty to animals and safeguard their welfare, including the Animal Welfare Act 2006. The Conservatives have a manifesto commitment bring in a new law expressly recognising that animals are sentient. I very much support this and will maintain pressure on the Government to keep their promise.

Significant progress has already been made in relation to restricting the use of intensive farming methods which involve close confinement cages. Keeping calves in veal crates was banned in 1990, sixteen years before the rest of the EU, and close confinement stalls for sows were outlawed in the UK in 1999. Battery cages for laying hens were stopped in 2012.

I would like to see further progress towards removing close confinement systems from farming. For example, we should work towards an end to the use of so-called ‘enriched cages’ for hens. I would also like to see ‘free farrowing’ systems start to replace farrowing crates in the pig industry. In 2019, I hosted an event in Parliament for Compassion in World Farming to call for a move away from farming methods that involve close confinement cages.

Lastly I want to reiterate my personal commitment on these issues. When I was an MEP between 1999 and 2005, I campaign successfully for tougher rules on live transport of animals and an EU-wide ban on cosmetics testing. During my time as Environment Secretary, I initiated a series of animal welfare policy changes including:

These measures are in addition to a number of improvements in animal welfare already introduced by the Conservative Government, including banning third party sales of puppies, mandatory CCTV in slaughterhouses, and introducing one of the world’s toughest bans on ivory sales.

I will continue to make the case for raising standards of animal welfare."