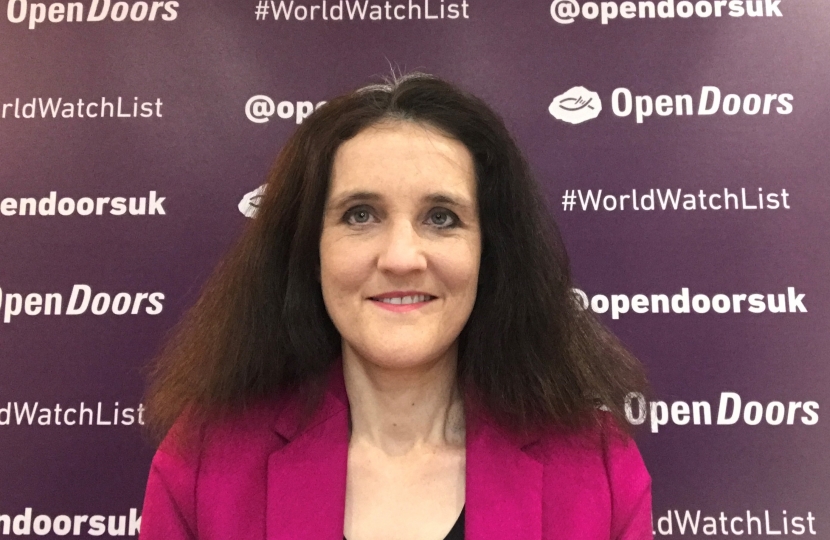 Chipping Barnet MP Theresa Villiers has warned that increasing numbers of Christians across the world continue to experience persecution, with the pandemic adding to their suffering.

Theresa made the remarks at yesterday’s virtual launch for the Open Doors Top 50 World Watch List on the global persecution of Christians.

The study found that millions of Christians face very high or extreme levels of hostility and discrimination for their faith – an increase of 19 per cent since last year. The total number of Christians killed for their faith also rose by 60 per cent to 4,761 with Nigeria the most dangerous place, accounting for 3,530 of those deaths.

The most difficult and dangerous place to be a Christian, according to the report, is North Korea. Afghanistan came in at number two followed by Somalia, Libya, Pakistan, Eritrea, Yemen, and Iran.

Theresa said the rise in fatalities was a “devastating finding” of the report and she added: “It is especially worrying that reports of forcible conversion and forced marriage have increased, highlighting the gendered nature of many of the attacks reported.

“High levels of pre-existing deprivation in many Christian communities has meant the Covid pandemic has hit them hard. In many instances, believers have faced discrimination and denial of access to Covid support schemes.

“Islamist militants have used Covid restrictions to gain ground in sub-Saharan Africa, exploiting the inability or unwillingness of governments there to protect vulnerable communities.”

However, the former Environment Secretary also said there was some good news. Sudan is introducing new constitutional guarantees on freedom of religion and, in Sri Lanka, local churches have been delivering emergency Covid supplies to people who had previously attacked them – something that is helping to transform local relationships.

Theresa also said that the church continues to grow in China. It now numbers around 100 million people and could surpass the size of Chinese Communist Party membership this year.

Almost a hundred MPs took part in the virtual launch, which Theresa usually hosts in parliament. Around 2000 people watched on YouTube.

The launch event can be viewed at https://www.opendoorsuk.org/news/latest-news/world-watch-list-2021-launch/.