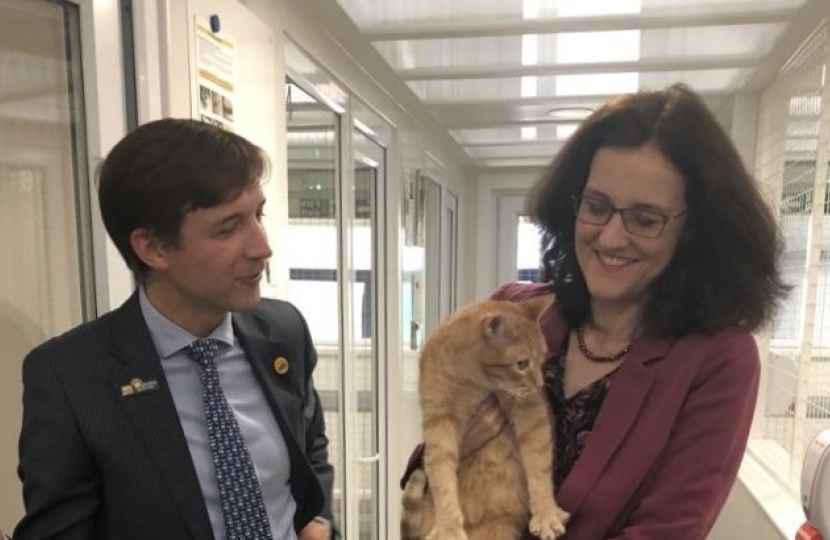 MP, Theresa Villiers, has backed the call by the charity, Cats’ Protection, that a law should be introduced to make it mandatory for pet cats to be micro-chipped. This would bring the rules on cats in line with dogs.

In her former role as Secretary of State for the Environment, Food and Rural Affairs, Theresa was an enthusiast for pet micro-chipping. She persuaded her colleagues to put this in the Conservative manifesto and launched a call for evidence on making micro-chipping compulsory for owned cats.

“I had the opportunity to hear about the benefits of chipping first hand during a visit to Cats’ Protection’s Mitcham Adoption Centre in 2019” Theresa said. “Compulsory micro-chipping will improve the welfare for millions of cats,” she continued.

“A microchip increases the chances of a lost or injured cat being safely reunited with their owner. Given the public support for giving owned cats the same protections that dogs have enjoyed since 2016, I am urging Ministers to introduce this change without delay. I very much hope we will see it implemented before the end of this year.”

Following a meeting with representatives of Cats’ Protection, Theresa wrote to DEFRA Minister, Zac Goldsmith, to ask for proposals on compulsory chipping to go ahead as soon as possible. She welcomed the progress made on this through a consultation launched on 23 December 2020.

Cats’ Protection’s “Cats and Their Stats” (CATS) report highlights that a staggering 2.6 million owned cats across the UK remain unchipped.

The photo shown with this article was taken during Theresa's 2019 visit to Cats Protection in Mitcham.