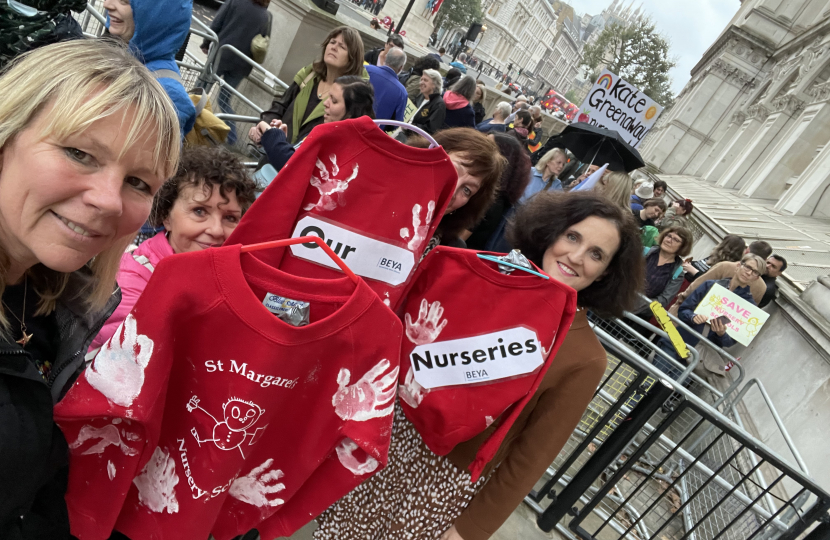 Theresa has worked for several years to support the maintained nursery schools in Barnet that have not been fairly funded, and which often have extra costs to meet because they look after many children with special needs.

Children’s Minister Will Quince has now announced there will be an extra £10m nationally in addition to the existing supplementary funding which supports maintained sector.

The money looks set to help Brookhill, Hampden Way and St Margaret’s nurseries, which together make up the Barnet Early Years Alliance (BEYA).

Along with Moss Hall in North Finchley, they do not presently receive even the limited supplementary funding from the Government that supports such schools in other areas.

The extra £10m is accompanied by a consultation on a fairer distribution between schools. This opens the door to Barnet schools getting a share of supplementary funding for the first time.

The consultation states that "we are investing an additional £10m into MNS supplementary funding from 2023-24 to ensure that the vast majority of local authorities see their supplementary funding hourly rate increase, with a more generous increase for the lowest funded." This process will look at ways to reform how early years funding is distributed around England, to ensure the system is "fair, effective, and responsive to changing levels of need," Minister Will Quince said. There will be a minimum level of funding for all schools.

“I am really pleased the Government has agreed to extra money for schools like BEYA and it will consult on a fairer allocation of funding between schools," Theresa said.

“The extra money, the minimum funding level, and the consultation, are big steps forward, and very much what I have asked for. If the proposals in this consultation are implemented, this should save our local maintained nursery schools."

“The issue we have now is that the extra money looks like it will not be available until September 2023. It is no understatement to say the need of the BEYA nurseries is acute and we need a solution that tides them over until the funding lifeline announced today comes through."

Theresa is secretary of the All-Party Parliamentary Group (APPG) for Nursery Schools, Nursery & Reception Classes, which has been working to tackle the funding crisis for maintained nursery schools. She has raised this issue in Parliament several times to urge the Government to act. She has met the Chancellor of the Exchequer a number of occasions to discuss it, as well as the Chief Secretary to the Treasury, and successive Education Secretaries.