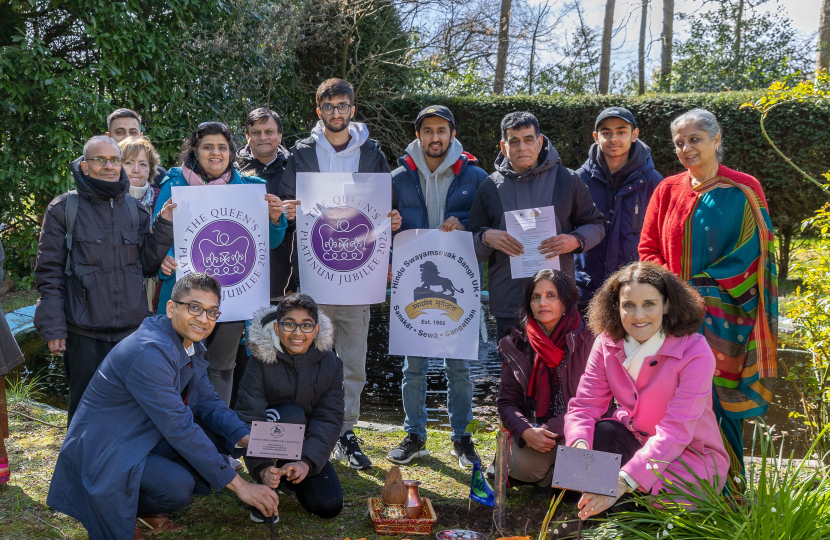 Welcome to my April e-newsletter. I hope that you all had a chance to enjoy some time off during the Easter break.

I have the rather unusual news to report that I have been formally sanctioned by the Putin regime. I am among 286 MPs and former MPs who have been banned from travel to Russia after being accused of “hostile rhetoric”. Needless to say, this will not stop me speaking out against Mr Putin’s unprovoked and unjustified invasion of Ukraine.

After a busy week concluding legislation on matters such as borders, policing, election reform, and health and care services, Parliament has prorogued in preparation for a new session which will start with the State Opening and Queen’s Speech on 10th May. This month also saw the start of Parliamentary scrutiny of the landmark Online Safety Bill. This world leading legislation aims to hold the big tech companies to account and to make them do more to protect people (especially children) from harmful content online.

I’ve raised a number of issues on the floor of the House of Commons since my last newsletter. That includes a question on the Ockendon Review which highlighted shocking failings in maternity care at the Shrewsbury and Telford Hospital Trust. It is essential that lessons are learned so this kind of scandal is not allowed to jeopardise the lives of mothers and babies ever again.

I also had the chance to repeat my call for expanded GP capacity in Barnet in a debate on the need to ensure new housing development is accompanied by increased provision of NHS services. And I highlighted the need for action to try to get energy prices down to help vulnerable households and pensioners. Other questions I put to Ministers have included:

You can see my contribution at PMQs last week reported in Hansard here.

I was pleased to take on a vice-chair role in a number of All Party Parliamentary groups holding their AGMs this month including APPGs for Cyprus, Apprenticeships, the Polar Regions, and Woods and Trees.

I also joined an event in Parliament hosted by the Humane League UK and the RSPCA on ending the use of cages for egg-laying hens. And I was part of a delegation of MPs to meet Middle East Minister, Amanda Milling, to discuss the worrying increase in terror attacks against Israel.

Finally I am happy to say that the visiting arrangements in Parliament have finally returned to normal after nearly 2½ years of restrictions. That means that I have been able to welcome larger groups back to the House of Commons as part of my “Meet Your Street” programme to show constituents around some of the historic parts of the Palace of Westminster.

Villiers sanctioned by Putin regime
Theresa Villiers, is one of 286 MPs and former MPs who were sanctioned by the Russian Government this week. Speaking after the news broke, Ms Villiers said “This will not deter me from speaking out against Mr Putin’s barbaric and aggressive war.” Read more…

Help with the cost of living
Local MP, Theresa Villiers, has been keeping up the pressure for help for households who face difficulties as a result of the inflationary pressures now being seen around the world. This is an issue she has raised in Parliament, most recently when she appealed to the Secretary of State for Business Energy and Industrial Strategy to work to find ways to bring down global energy costs. Read more…

MP highlights the need for GP expansion where new homes are built
Barnet MP, Theresa Villiers has spoken up again in Parliament on the need to expand access to GP appointments in Barnet. She was taking part in a debate on health provision in areas where housing developments are being built. Read more…

Villiers teams up with HSS to plant trees for the Queen's Green Canopy
Chipping Barnet MP Theresa Villiers helped plant fifteen trees in Whalebones in High Barnet to mark the Queen’s Platinum Jubilee. At a ceremony organised by Hindu Swayamsevak Sangh (HSS), Theresa joined HSS supporters to plant the saplings in the grounds of Whalebones House. HSS is a movement for young people which aims to inculcate Hindu values of selfless service to the community. Read more…

Theresa’s next diarised surgery takes place from 1030 to 1200 on Saturday 7th May at her constituency office at 163 High Street. Constituents wishing to see Theresa or her staff will need to make an appointment in advance. You will NOT be seen if you turn up without a pre-booked appointment. Bookings for face-to-face meetings or Zoom calls can be made using the contact details set out in the preceding paragraph.